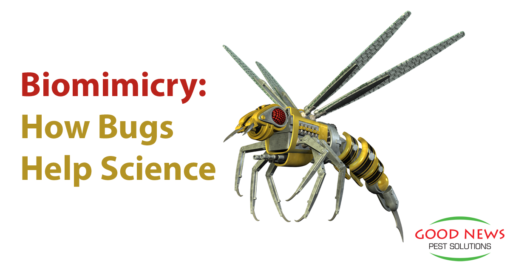 There’s a long standing tradition of science borrowing from nature to create new technologies. Biomimicry is a fancy word for seeing what God has created in nature and being inspired to adapt it for human’s use. Helicopter propellers, your smart phone camera, and even Velcro were all inspired by the Master Creator's design work. Bugs may seem like a strange inspiration for technology, since most people see them merely as pests they’d rather not have around them. We understand that tendency, but we also know better than most that some of the best technological advancements are inspired by our insect inhabitants. One clear advancement from the study of how God created insect life is probably pretty obvious – miniaturization. Knowing that some insects have somewhat advanced brains led to the ongoing quest to make computer components smaller and smaller. But one group of guys took the inspiration to a whole new level. RoboRoaches Ride Again! We’ve mentioned this possibility in a post a while back, but computer controlled roaches have continued to advance, uh, so to speak. A couple years ago, the guys behind Backyard Brains came up with an educational tool of sorts – they managed to figure out a way to operate cockroaches by remote control. They even raised $12,000 on Kickstarter to develop an iPhone app and bring the project to the masses. Since then, their control systems have gotten smaller and more precise, and some folks have added miniaturized cameras and sound recording devices to the cockroach’s ‘backpacks,’ giving a brand new meaning to “bugging” someone. In fact, fully tweaked-out RoboRoaches™ are used as a plot point in a movie coming out later this year. And other bugs aren't far behind. I'd love to be a fly on the wall for that. Bright Blue Butterflies There’s a distinct chance that the device you are reading this post on could itself be an example of biomimicry. Back in the early 2000’s, an engineering grad from MIT was inspired by an article that explained how butterflies create the bright colors we see in their wings. Rather than a pigment or dye, as we would typically get a colorful array, God created the butterfly’s wings in such a way that the layers of shingled plates that make up the wings reflect a particular color in daylight. Instead of adding something to the surface or expending the energy required to make the wings different brilliant hues, the structure of the wing itself causes the colors we see. That inspiration led to experimentation on flat device displays. What he ended up with was a panel made up of a series of microscopic mirrors that uses ambient light, rather than requiring a typical powered LED panel (itself a miraculous innovation). Technology developer Qualcomm bought his company and used the technology in e-readers, smart phones and laptops. Oh, and remember that blue dress-gold dress debate? It was an unintentional viral consequence of that very same perception of color based on light reflections. Butterfly’s Dark Underside On the flipside – literally – of butterfly wings, the surface is darker, almost black in most instances, which inspired university researchers in China to develop a new super dark carbon film that is applied to solar panels, vastly increasing their efficiency. The darker surface looks that way because of nanoscopic interference waves  - that inspired some Canadian scientists to create the most advanced anti-counterfeiting stamp ever – even better than holograms – and it’s not restricted just to money. And the same principle inspired a New York company to develop more reliable RFID chips – like those used for animal identification and in your latest credit cards. A Few More Highlights We’ve talked in an earlier post about the communication skills of fireflies’ lights, but scientists also analyzed how the scales surrounding the genus Photuris work and used it to develop an LED bulb that’s almost twice as bright. It sounds like it’s right out of a science fiction story, but a California company found a way to utilize literally thousands of plugged in electrical devices that would normally just suck up power whether they were on or off, and created a machine hive mind, inspired by bees, to try and better manage the state’s energy consumption and eliminate brown outs. We here at Good News Pest Solutions are genuinely thrilled to see how inspired we can be by the Master Creator’s designs in nature. That’s one of the reasons we sought out and developed the most comprehensive, green approach to pest control. If you need to get the creepy crawlies out of your house, contact us today!