Ants belong to the order Hymenoptera, which is the same family as wasps and bees. They are social insects, which mean they live in colonies with a caste system. Adult ants will fall in either one of three categories: workers (sterile females), reproductive females (queens), or reproductive males. The immature stages – egg, larvae and pupa – are referred to as the brood and are also found inside the nest. A colony that has only one queen in referred to as ‘monogene’ and a colony that has more than one queen is ‘polygene’.

One feature that distinguishes ants from other insects is its elbowed antennae. The first segment is called the scape and the remaining segments are collectively called the funicle. The pinched waist of an aunt is called the pedicel, a constricted area where you find the nodes (petioles) used to distinguish between different species of ants. The front wings of swarmer’s are longer and wider than the hind wings.

Like humans, ants secrete pheromones, chemical messages. Ants, however, us them for trailing, mating and warning (alarm) signals. Worker ants cannot digest solid food. They must feed solid pieces to the larvae which will digest and regurgitate the food back to the workers in a liquid form. Honeydew is a natural liquid food source for ant workers. Passing of food from mouth to mouth is a form of trophallaxis.

Ant colonies that have all the same size workers are referred to as monomorphic. If there are two size workers, usually referred to majors and minors, the colony is dimorphic. Polymorphic means there are many different size workers in the colony but they are generally divided into three groups. The smallest workers are ‘minims’ they stay in the nest and take care of the brood and queen. The intermediate workers ‘minors’ do it all, they take care of the brood and queens, defend the nest and forage for food. The largest workers are ‘majors’. The majors do the heavy work, crack seeds, move large stones, and defend the nest.

Florida carpenter ants range form 1/5 to 1/2 “ in length, an evenly rounded thorax, one node in the pedicel, and red head & thorax and a dark abdomen with a circlet of hairs at the end. Florida Carpenter Ants: 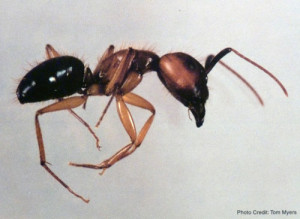 The red imported fire ant, otherwise known as (RIFA) is responsible for painful stings which can results in an itchy yellow pustule on humans and other animals. There are people who are allergic to the sting’s toxic venom and can succumb to anaphylactic shock.

The RIFA is reddish in color with a blackish gaster and 1/8-1/4”. It has a 2 segmented pedicel (2 nodes), and a 10 segmented antennae. Each antenna terminates into a 2 segmented antennal club. The workers are polymorphic having minors, medias, and majors. There are single and multiple queen nests.

The above ground cone shaped mounds are more apparent in the cooler months. During the heat of the summer the ants stay more below the soil surface. The only soil they won’t build mounds upon is in swampland. It has been documented that these fire ants are attracted to electrical fields and have been known to short out electrical current. They have been known to build soil tubes up the foundation of a structure of tree for shelter. These tubes are made of loose sand and are not glued together like termite shelter tubes.

The Red Imported Fire Ants will out-compete native species of ants especially the areas that have polygene colonies with numerous mounds. They are attracted to oils, will feed on honeydew, prefer liquid food sources and will readily attack live prey primarily arthropods.

Polygene vs. Monogene- Polygene colonies have many mounds that are close together. The workers of a polygene colony are much smaller and they have very few majors. They are less aggressive towards nearby colonies (more tolerant). The queens are smaller in terms of weight and each of them lays fewer eggs than an monogene queen but the overall egg output is much greater in a polygene colony. 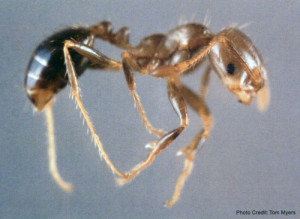 There is a ‘little fire ant’ that is similar to the red imported fire ant (RIFA) in that they sting, are reddish in color and have two nodes.

The differences are that they don’t usually build distinct mounds and they are monomorphic (same size workers). 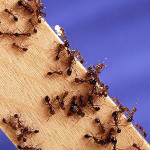 Acrobat ants are 1/10-1/6”, light brown to black with a 2 node pedicel which attaches to the top of the ‘heart shaped’ abdomen. They can raise their abdomen over their head and thorax when threatened.

Workers feed on honeydew and will also prey on insects. They nest in rotting wood, limbs, tree nooks, etc. outside and inside the structure they can be found in door frames and window sills. They wil also move into areas previously damaged by termites. 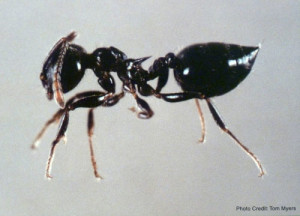 Big-headed ants are the only dimorphic structure infesting pest in Florida. They are 1/16-1/8” with a 2 segmented pedicel. The thorax has one pair of spines. Big-headed ants are light brown to dark reddish brown in color. The majors of this ant species can be distinguished by their large heads.

Big-headed ants feed on dead insects, seeds and honeydew. They prey on fire ant queens. Big-headed ants (Pheidole) can form ‘super colonies’ that can cover entire residential blocks! They are soil nesters and their sand mounds can be found in the cracks of sidewalks and along the foundation of structures. They will nest in potted plants and have been brought into homes during cold spells via these plants. One identifier is their ‘boneyards’. They kick out their dead from the nesting area creating a pile of dead ant bodies. Like the red imported fire ants (RIFA), these critters can also build soil tubes. 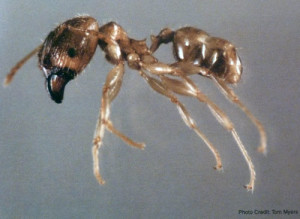 Whitefooted ants are about 1/8” in length, have a single nearly flat node and are dark in color with pale colored tarsi (feet). It is a pest in south Florida primarily Dade, Palm Beach and Broward counties. It was first reported in 1922 so it is not new to Florida.

Whitefooted ants like sweet liquid and will tend aphids and other honeydew producers. Whitefooted ant workers are fed trophic eggs that are produced by all females so there is no trophallaxis occurring in the nest. This is a main reason why baits alone will not affect the entire nest.

They nest in similar locations as the crazy ant. Areas with heavy vegetation are preferred. They can be found under the bark and in the soil at the base of trees. Any vegetation lying on the ground can be used as nesting material.

Colonies can get very large (several million). They will swarm late May to mid-June. The winged alates are all females that had mated in the nest prior to swarming. 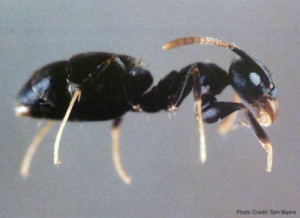 Crazy ants are 1/10” long, have one node and are dark brown to black in color. They have a circlet of hair at the end of their abdomen. The first segment of each antenna is more than twice as long as their head. This and the face that their legs are extremely long cause them to appear spidery. They get their name from their seemingly aimless and haphazard trailing. They run around like they are crazy.

They are monomorphic and polygene (8-40 queens). Most new colonies are formed by budding but they will swarm. Crazy ants feed on animal matter, insects and sweets. They can be brought into homes in the soil of potted plants. Crazy ants are opportunistic in their nesting habits. Outside they nest at the soil surface under stones, boards, firewood, patio blocks, etc. They can also be found in mulch and vegetation lying on the soil or against the foundation wall of a structure. Inside they can be found in wall voids, potted plants and under carpet. 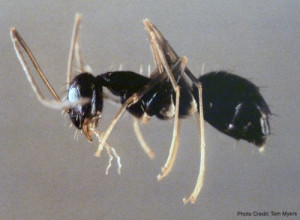 Argentine ants are 1/12-1/8” long, have one pointed node and are light to shiny dark brown in color. They are monomorphic and polygene. The queen helps care for the brood and cleans and feeds herself. They create large populations in their colonies. Honeydew is a favorite food source.

Argentine ants can be found trailing along cracks and crevices of concrete walkways and edges along buildings. They nest shallow in the soil under form boards along walkways and under wood object and piles of debris on the ground. 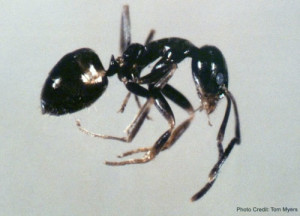 Pharaoh ants are small 1/16-1/12” long; they have a 2 segmented pedicel and are golden yellow to red with black marks on the gaster. The antennae have 13 segments and each ends in a 3 segmented club. This is the main way of distinguishing the Pharaoh ant from the very similar thief ant. The thief ant has a two segmented antennal club. They are monomorphic and polygene.

Pharaoh ants nest inside wall voids in structures. They use plumbing and electrical lines as structural guidelines (highways) inside walls. They also nest under floors and behind baseboards.

New colonies are formed by budding (sociotomy). Groups of workers will carry brood to a new site to establish a nest. Overcrowding may cause budding but so will the use of residual pesticides. This is why you must bait to eliminate Pharaoh ant colonies. Swarmers are developed by are not seen since they remain inside the nest. 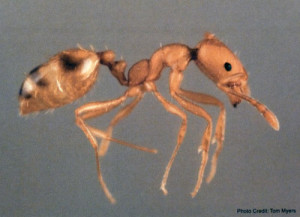 This ant resembles the pharaoh ant except that it is the only structure infesting ant that has a 2 segmented antennal club.

The Thief Ant gets its name because it lives in the outskirts of other ant nests and feeds on the larvae. 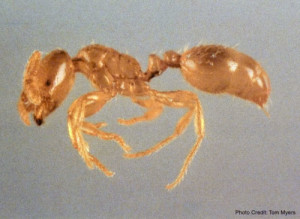 This is the smallest structure infesting ant. It is 1/16”. The pedicel has on flat node. The legs, antennae and abdomen are pale and nearly transparent. The head and thorax are dark.

Ghost ants are monomorphic and polygene. They reproduce by budding, and no swarming has been observed with this ant species. Like carpenter ants and whitefooted ants these critters will tend aphids for honeydew.

They can nest in almost any protected area. Outside they nest in the soil at the base of foundations, porches, shrubs and trees. They can be brought into homes in potted plants. Inside they have been found in breadboxes, an iron and shower curtain rods. 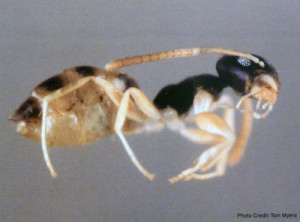 Pavement ants are NOT found in Florida.

Pavement Ants can be distinguished by grooves in their head and thorax. The thorax also has one pair of spines.

It is called the “Pavement” Ant because it builds its nests under sidewalks, driveways and building foundations. It will displace soil along these areas and have ‘crater shaped’ mounds at the openings to the nest. 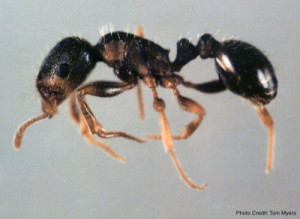 The harvester ant has a brush of long hairs or bristles on the underside of its head. It uses this brush to carry water, clean its legs and antennae and remove soil from the nest. They gather seeds and are known to clear an area around their nest of vegetation. They inflict a viscous sting.

They can nest in almost any protected area. Outside they nest in the soil at the base of foundations, porches, shrubs and trees. They can be brought into homes in potted plants. Inside they have been found in breadboxes, an iron and shower curtain rods. 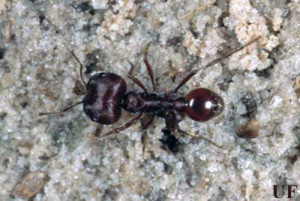 The odorous house ant is brown to black with one flattened node that is tucked under the front of the gaster. When crushed they smell like rotten coconuts! They are a native ant found throughout the United States except where they have been driven out by the Argentine Ant (Florida).

The colonies have numerous queens (polygene) and each can lay only 1 egg per day. New colonies are created through budding but they may send out swarms June and July. The males swarm first and typically die in days. The females and workers can live for years.

They commonly nest shallow in the soil, under objects on the ground and between stacked items. It is common for them to invade a home after honeydew is washed from plants by a heavy rain. Once indoors they will nest in walls, flooring and sills. 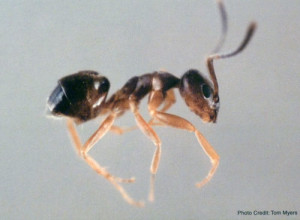