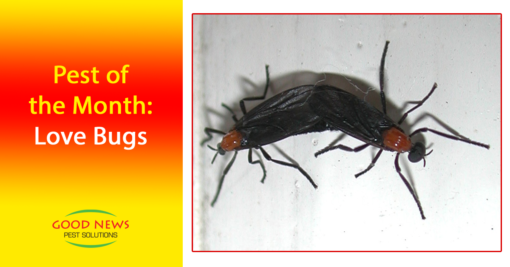 Pest of the Month: Love Bugs!

We love our temperate weather here on the Gulf Coast of Florida. But when it’s 80-90 degrees every day, sometimes it gets hard to keep track of the seasons. So we come up with our own seasons – Tourist season, Hurricane season, Citrus season, Rainy season, and, of course our favorite – Love Bug Season! Love Bug Season! That glorious time when the air on our highways and side streets alike are filled with overly-excited, amorous insects that end up splattered all across our windshields and radiator grills, as well as ruining the paint job on our freshly-washed cars and trucks (although newer vehicle paint has cut this problem down significantly). Actually, Love Bug Season is twice a year – the month of May and the end of September, a great way to frame the summer months here in the Sunshine State.

Love Bugs are actually Plecia nearctica from the fly family. Their common name comes from how we usually see them… Car exhaust is a natural aphrodisiac, so they start getting busy in mid-air right before the source of their pheromone fix ‘knocks them into next week,’ as my daddy used to say. Unlike many other insects, male and female love bugs do not have any distinguishing color differences to separate them. They are black with a red or orange strip on the top of their thoraxes. Size is a factor, though. The males are slightly longer than the females, but the females weigh an average of 3x more, and 70% of that is their ovaries.

They DO Have a Purpose

Speaking of ovaries, female Love Bugs that survive their romantic encounters lay 100-300 eggs at a time. The eggs are laid in swampy areas, moist roadside swales, and damp wooded areas. Once the eggs hatch, the larvae are much like their maggot cousins. The difference is, they devour the leaves and detritus, essentially recycling the organic matter. Additionally, those Love Bugs that survive also serve as pollinators. Not to the extent of our friends the bees, or even the mosquitoes, but they do contribute significantly to the ecosphere.

Blame it on Texas

There’s a persistent urban legend/internet rumor that claims the University of Florida introduced Love Bugs accidentally while they were trying to genetically mate flies with mosquitoes. In reality, Love Bugs are native to Central & South America, but growing industrialization during and after the first World War caused them to migrate further north. The first recorded sighting of a Love Bug swarm was in Galveston, TX in the 1920’s, most likely traveling as stowaways on a ship. From there the little buggers spread all along the Gulf of Mexico, and more recently, into the Carolinas. So, whether you’re headed up I-75 to Bradenton & Lakewood Ranch, or down US 41 to Punta Gorda & Port Charlotte, there’s really nothing you can do to avoid Love Bugs this time of year. Just give your hood a good rinse down when you get home and try these other ideas for getting rid of them naturally. For all your other pest control needs, drop us a line! Good News Pest Solutions is always happy to help out!