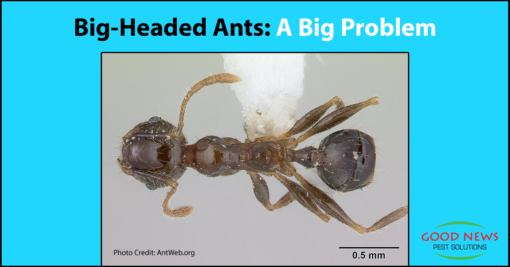 Just like most of our residents here on the Gulf Coast of Florida, a lot of our animals, plant life, and insects are also from other parts of the United States and the world. Sometimes that can be a good thing. But in many cases, bugs introduced from foreign sources are more invasive – taking over the native insects' habitat and creating an imbalance in the natural ecosystem. That’s definitely the case with Big Headed Ants (BHA). Pheidole megacephala is considered one of the top 100 most invasive species on the planet. Big Headed Ants were first identified in 1793 on the Island of Mauritius in the Indian Ocean. Like many other species of ants, BHA’s managed to board the trading ships of the Silk Road – the routes between Europe, Asia, and the Americas – and then were transplanted all across the globe.

Including the Sunshine State...

Here in Florida, the Big Headed Ants were first introduced in the Everglades, Key West, and St. Augustine, but they quickly spread to Charlotte, Broward, Brevard, Hillsborough, Highlands, Lee, Pinellas, Manatee, Sarasota, Seminole and Monroe Counties. Big Headed Ants have been a problem for decades – even displacing many of the other invasive ant species, like red fire and white footed ants. But scientists are saying that in recent years, they’ve become an even larger problem. They believe the large spate of hurricanes that struck the Gulf Coast, from 2003 to 2005, the most active tropical activity for our area since the '60’s, destroyed lawns and trees, which resulted in importing replacement soil and vegetation, which may have been infested with BHA’s.

Despite their name, only 1% of the Big Headed Ants population sports the larger head – the major worker or soldier ants. The front half of the soldier’s head is sculptured while the back half is smooth and shiny. Minor workers look much like other ants, except for small spines on their midsection pointed upward and the long hairs that cover their entire bodies. Colonies are very large and will contain a high number of fertile queens, another reason for their rapid spread. Because of our subtropical weather, the ants reproduce almost year round. You may see the winged queens flying about in the winter and early spring, but once fertilized, they shed their wings and nest in loose soil. They will burrow down and can lay almost 300 eggs per month. The BHA’s feed on dead insects and sometimes live ones, devouring the honeydew extracts from sap-sucking aphids, whiteflies and planthoppers. Strangely, Big Headed Ants have a symbiotic relationship, since both are targeted by the same predators, lady beetles and certain butterfly larvae.

Should I be Worried?

Like their other invasive ant neighbors, the red imported fire ants, Big Headed Ants do bite when defending their nest or colony. Unlike fire ants, BHA bites don’t sting, but some people may still have an allergic reaction to them. The real problem, though, is food contamination. Once the ants find a food source – sugary items to them are similar to their natural nourishments – they quickly alert any and every Big Headed Ant in the area – drawing them in large numbers. Trust me, you don’t want to wake up in the middle of the night to find your bed or carpets crawling with hundreds of ants because a cracker crumb wasn’t picked up.

Check With the Experts!

BHA’s are sometimes mistaken for termites because of the way they burrow into trees and their dirt leaves small tubes that they travel through, similar to those created by subterranean termites. Because of this, if you think you have an infestation, call us right away. Our highly-trained staff can quickly identify and properly treat whatever infestation you’re experiencing. We cover most of the Gulf Coast – from Lakewood Ranch to Punta Gorda, and we specialize in natural products that are safe for the whole family!