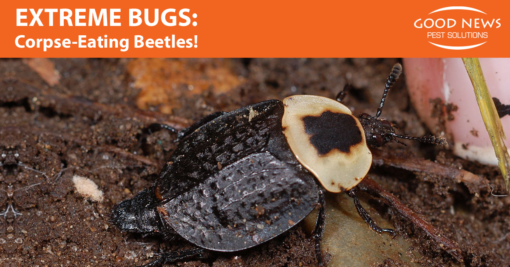 We’ve highlighted quite a few interesting extreme bugs over the years. It’s really incredible all the variety that God created in our world, and there are few scientific classes with more diversity than the insect world. We think this month’s extreme bug is one of the most interesting. The American Carrion Beetle may seem like just a slightly larger than normal beetle, flying and crawling around, but these beetles actually help solve crimes!

The Necrophila Americana are mostly found in the Eastern half of the United States (although there are other species in Asia). As we mentioned, they’re larger than most beetles – a half an inch long or bigger, and they have distinctive markings: a prominent yellow pronotum (kind of a cape that falls over their ‘shoulders’) with a black jagged spot in the center. Sometimes they’re even mistaken for bumble bees when they’re flying around.

It’s true, American Carrion Beetles get their name from their diet, from their earliest days as larvae through the end of their life, they devour decaying flesh. They will occasionally dine on rotting fruit, fungi and vegetation, but they much prefer the taste of carrion – human and other mammals. After they feed, they leave some leftovers for the eggs that they lay on or near the decaying flesh. The eggs hatch larvae within a few days right next to their food supply. It might be easier to think of them as the ultimate recyclers – repurposing nasty rotting meat to preserve life. Then there’s their crime fighting abilities.

If you’ve watched any of those police shows on TV, whether its CSI, Bones or Law & Order, you’ve most likely seen at least one episode where they use entomology – the study of insects – to identify how long a body’s been dead. Usually the first insects to show up on a dead body of any sort are flies – blowflies. But carrion beetles, once they find a food source, can be very aggressive about keeping other potential buffet sharers away. The beetles will dig under their lunch, eventually covering it up with loose dirt, or working together to carry the corpse away. And because they’ve laid their eggs on the rotten flesh, they’ll often devour the fly larvae as they hatch to protect their young. Because their life cycle is so distinct and specific, the guys and gals in the lab can analyze the age or generation of beetles they find on a dead body to accurately calculate the time of death – or at least dumping. We should point out though, that these guys aren’t fun at parties, as the definitive example of the old adage, you are what you eat. To scare away predators, carrion beetles smell… just like their favorite meal. We hope you don’t ever have a use for the American carrion beetle, but rest assured, if you run across some, you can make us your second call (after 911 or Animal Control). Our field agents are highly trained and know just how to handle just about any insect-related matter you’ll find. And we do it all naturally, with no harsh chemicals like a lot of other guys. And we cover a large range - from North Port to Sarasota and everywhere on the Gulf Coast of Florida.