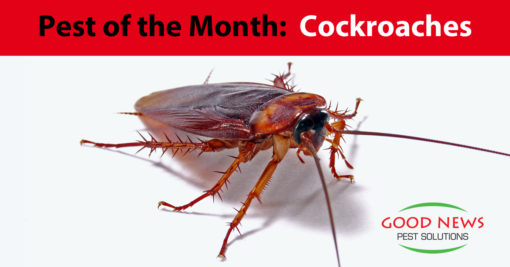 Pest of the Month: Cockroaches

September is known for a lot of things – the start of the school year, the end of the harvest, even in 1752 for losing 11 days (when England and her colonies joined the rest of the world in switching from the Julian to the Gregorian calendar)! And September now holds the distinction for having the cockroach as its Pest of the Month!

While cockroaches themselves only live about a year, cockroaches as a species are one of the oldest ones on the planet. Whether you believe in the theory of evolution or God’s divine creation, cockroaches have been here since the beginning. There are, depending on who you talk to, between 3500 and 4500 species of these adaptable suckers, although luckily only about 30 of them live near humans.

Thanks to some confusion in the wake of the bombings of Hiroshima and Nagasaki, the general public now believes that cockroaches will be the final survivors of a nuclear holocaust.  That’s not entirely true.  The fact is, they would not survive a nuclear explosion, but they can take a LOT more radiation than we can – up to 10x as much. On top of that, cockroaches have many other remarkable survival skills – they can survive without food for a month, can hold their breath for 40 minutes, and can survive for a week without their heads. Cockroaches will eat ANYthing. Even their own mates. Cockroaches prefer meats, starches, and sweets, including beer, but they will eat just about anything to survive, including other insects and other cockroaches.  There are even fossil records that appear to prove cockroaches ate dinosaur poop back in the day.

They Come in All Sizes

A day old baby cockroach is about the size of a speck of dust – but can already run almost as fast as their elders. 3 miles an hour may not sound like much, but that’d be the equivalent of a human sprinting 200 miles an hour. Babies grow to adult size in a little over a month, but by then can have spread more than their share of allergens and diseases. Average adult cockroaches range in size from ½ to 2-inches long. Here in Florida, we’re familiar with some of the larger versions of the classic German cockroach. But the largest cockroach is a species in South America, the Megaloblatta longipennis. It grows to 6 inches – with a wingspan of over a foot! That’s a little bigger than our Palmetto Bugs.

Yes, believe it or not, in China, they farm and harvest cockroaches. According to university scientists there, American cockroaches can be cooked and consumed or ground into a powder that is utilized in burn creams and cosmetic facial masks. Robotics scientists are also studying cockroaches’ exoskeletons and wings and their legs for prosthetic advancements. Of course, we’ve told you about several of these advancements and even the Robo-Roach. We should also clarify at this point that the common names for many cockroach species are the result of nationalism – or rather anti-nationalism. Here in the states we have German cockroaches and in China and Africa they have American cockroaches. The names are sometimes thought to correspond with their point of origin, but more likely are examples of naming a bug they didn’t care for after the society they despised, or even the indigent population they’ve displaced.

How do I Get Rid of Them?

Although cockroaches, like all God’s creatures, do serve some purpose – they help cultivate the soil and do assist with certain aspects of natural recycling – none of us want them in our homes or businesses.  So, since September is the beginning of the last third of the year, this is the perfect time to start our Go Green Plus 3 treatment. We’re known from Bradenton to Punta Gorda for our all-natural, safe, 100% organic pest control methods that keep the crawling bugs out of your house. Call us and one of our highly trained staff can get you started. You might also want to ask about Term Assure 365, which adds our exclusive termite prevention, for just a little more. And if you want to buy a Robo-Roach, well, just google it.