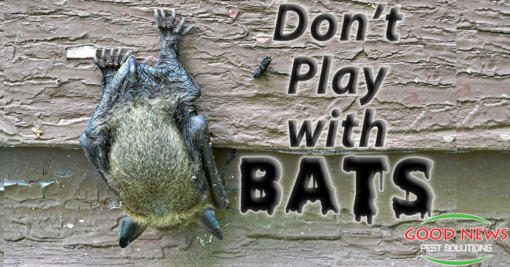 Don't Play With the Bats!

It’s the time of year when we start thinking of Halloween and all that entails: trick or treating, witches, black cats, and of course, vampires that turn into bats. Actually, funny story – did you know that in Bram Stoker’s novel, the most famous (or is that infamous?) vampire, Dracula, is never seen turning into a bat? It’s hinted at, but he actually is more likely to turn into a wolf! How’s that for a monster mash? We know in real life that bats aren’t evil bloodsuckers; they’re cute little nocturnal mammals. But that doesn’t mean they’re all loveable and fun to play with, either!

...which some high school kids in Utah found out the hard way. More than 40 kids at two high schools in the Salt Lake City area had to be treated for rabies after a student was scratched by a bat. Both schools are on the bats migratory path, about 20 miles apart. And while only one person at one school was positively scratched by a bat, the second school discovered a massive bat colony in the attic after getting reports that students were carrying the bats around. Because rabies is not easily identified in bats by sight, every student who came into contact with the bats was forced to undergo 2-weeks of 5-shots, because once the symptoms appear in humans, it’s almost always fatal.

The good news is, while there is always a chance of stumbling over a rabid bat, most bats generally keep to themselves, and, as you might imagine, mostly come out at night. In fact, in Utah, just as here in Florida, it’s illegal to disturb the bats because they are a protected species (as in, just this side of endangered). And except for the rare case of rabies, none of the 13 species found in Florida are interested in biting you. In fact, their status is one of the reasons we’ve made bats our pest of the month for October. Luckily, October is in the ‘off-season’ for bat mating. That means we can do what we call exclusion. We safely relocate the bats from your home or business to happier locales. If it were earlier in the year, we are not as able to assist. April 15 to August 15 is bat maternity season, and because of their protected status, even the highly-trained professionals on our Good News Pest Solutions team can’t touch them. So we recommend checking before it’s too late – in between searching for your annual receipts, for example – or giving us a call in September.

If you do find one or more bats in your attic or office space in Bradenton or Port Charlotte, just call us. Don’t try to touch it or move it on your own. Even if they aren’t going to bite you, they’re not going to be thrilled at being poked at, and again, it is against the law. We’ll find the bat a safer place to live and you can focus on deciding which one of those fun size candy bars you’re going to give out!