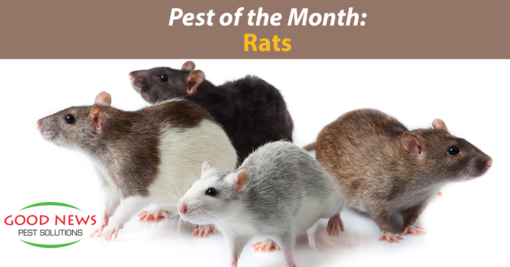 Pest of the Month: Rats!

Was there ever a mammal more reviled and maligned than the rat? First to leave the ship, the nickname for anyone who acts in their own interest at the expense of others, accused of spreading disease (even when they don’t). Even animal rights activists don’t get as riled up when they’re used for scientific testing as they do about other, cuter animals. In fact, any sympathy they get is mostly from that Pixar film. And to be sure, some of the criticism is well-earned. They are well-known to be scavengers. They have helped circulate some diseases – 35 according to the CDC – in populated areas, just not the Black Plague. That particular outbreak was likely caused by another rodent renowned for evil – or maybe not – the Gerbil. Rats eat their own feces – apparently for its nutritional value. They also can’t control their bladders. As they walk, they dribble urine everywhere.

A Problem of Perception

So it might surprise you to find out that rats are actually some of the cleanest animals around. They can spend several hours a day on their grooming. They’re actually less likely to catch or transmit diseases than dogs and cats! They’re also incredibly loyal, loving, and community-oriented animals. A single rat will get despondent if left without companionship. By the same token, they suffer some of the same social complications as humans do – being bullied, succumbing to peer pressure, often eating new things just because all the other rats are doing it. But as a community – known as a mischief – they care for their sick and injured, have dreams while sleeping, and make laughing sounds when they play. It’s rumored that both Queen Victoria and Peter Rabbit creator Beatrix Potter kept rats as pets. And along with Laika & Ham the Astrochimp, one of the first mammals in space was a brown rat, launched by France.

When scientists started seriously studying genetic diversity and cloning, they began by inbreeding rats, brother to sister, for 300 generations. The resulting rats were 99% genetically identical, even closer than we’ve yet been able to achieve with cloning. One of the reasons that rats seem to be everywhere is because of their mating schedule. A female rat can mate as many as – wait for it – 500 times the 6 hour period that she’s in the mood. And she gets feeling that way about every 3.5 weeks. So in the average rats lifespan of 2-3 years, she can produce somewhere between 4 and 18 THOUSAND descendants.  That might explain how they originated in Asia and Australia but conquered the rest of the world long before man did. Despite that, there are 7 species of rats on the Endangered Species list.

Smarter Than They Look

Their eyesight is poor, so rats use their whiskers and scent organs in their feet to find their way around. Rats are more intelligent than rabbits, hamsters, mice, gerbils and guinea pigs. They can learn their own name and once they’ve solved a maze, they never forget which way to go. Maybe we should harness them for our GPS’s! Did you know rats are trained to detect land mines without setting them off? They’ve even trained some to drag cable through walls for electricians.

Rats weren’t always a harbinger of doom. In Rome they were considered good luck; they’re one of the more positive signs on the Chinese Zodiac, and to this day there’s a Hindu temple in India where pilgrims come to worship and feed the rats.

But despite all the really cool things about rats, we know most people don’t want to see them in their homes – especially if they’re not pets! A rat can squeeze through a hole the size of a quarter, so it’s important to closely check your home if you happen upon one of the wild rodents inside. Or simply call an expert like us. We’ll exclude all visible entry points and seal your roof vents with our proprietary covers. We then eliminate the rats or mice already in your home and set up hidden bait stations around the outside perimeter to minimize the potential intruders. Or you can take it one step further and get our Thermal Acoustical Pest Control (TAP). It keeps insects as well as rodents out, helps soundproof your home, and is a high efficiency insulation that is not only more effective than the pink stuff, but far less dangerous for your family.  Give us a call and we can help you figure out which program is best for you!