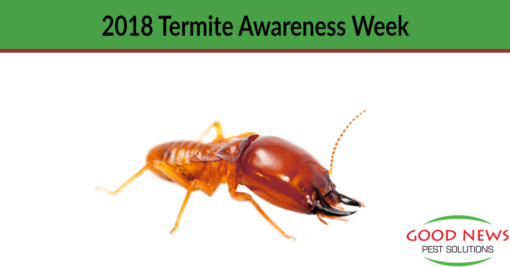 Here at Good News Pest Solutions, we have a saying that you might have heard us mention before: “There are two types of homes in Florida – those with termites and those that don’t have them YET.” Termite infestations cost home and business owners more than $5 billion in property damage in the United States every year, and a higher than average percentage of that is here in Florida. What brings termites to Florida? Probably the same thing that brought you – our stellar year round weather. For the rest of the country, termites are on the down-low, literally, until Spring. That’s why National Termite Awareness Week is the third week of March every year, the 11-17th for us this year. But here in Florida, where the temperatures don’t drop too far for long, termites are already active. Not only that, but in addition to the infestations other folks potentially face, we have our very own species of termites!

All common lumbers used in building fall prey to the West Indian Drywood Termite, and not just here in Florida. These termites love small furniture, like cabinets, headboards, picture frames, and table legs. They are easily transported, but stick to mostly southern, warmer climates.

The most common termite across the Unites States is the Eastern subterranean termite. It generally can be found on the east coast, but because they tend to infest building timbers, they get spread liberally across the continental US. They feed on the internal sections of the wood, causing severe damage.

By far the most aggressive termites you’ll encounter are the Formosan subterranean termites. These are also the ones we’re normally talking about when we say the termites are swarming (which they are right now). The Formosan termites develop colonies several millions thick and can target utility poles and docks as well as building lumber. Despite their name, the easiest way to locate them is by spotting their mud carton nests aboveground.

Another major destructive force, the Asian subterranean termite, also builds mud carton nests, but this species in the US is largely found in southern Florida. They don’t swarm as large as their Formosan kin, but they still cause millions of dollars in property damage.

We all love this semi-tropical paradise we’ve found on the Gulf Coast of Florida. Unfortunately, so does the aptly named Florida dampwood termites. While our heavy rains might deter some of the termite species out there, that’s not the case for these termites who are often found around sources of free water. That includes leaky roofs and fences and siding that get regular rain or sprinkler exposure.

But it could be worse – the Ft. Lauderdale-Miami side of the state has their own dedicated termite species.  Conehead termites are almost entirely found in and around Broward County, Florida.  This particular critter builds its mud-tube nests fully above the ground – you may even be able to follow the structure from the source of their hunger all the way back to the nest.

Signs of a Termite Infestation:

In case you still have doubts about the destructive capabilities of termites, The Professional Pest Management Alliance built a scale model of a 2-story house, complete with a cement slab, insulation, plumbing, electricity and a fully manicured lawn. They installed dozens of cameras around the hardwood floors, beautiful kitchen, and balcony overlooking the in-ground swimming pool. And then they released half a million Formosan termites into the structure to see exactly how they spread and demolish their food source. You can check out the latest here. Of course, with so much at stake, it’s not enough to just keep an eye out for the signs of a termite infestation listed above. By the time you’ve found evidence, its likely going to cost you a pretty penny to eradicate the termites and rebuild the damage they’ve caused. And your homeowner’s insurance does NOT cover it! The only way to be sure that your home is protected is to have a professional check and treat it on a regular basis. Not to toot our own horn, but our customers from Bradenton to North Port love our Term Assure 365. It’s the best termite protection we’ve found and it’s 100% organic and safe for the whole family. Plus, it comes with a 1-million dollar repair warranty, should your home get any damage from subterranean termites. Term Assure 365 also includes our exclusive Go Green Plus 3 program that protects your home and yard from all the other crawling insects that might want to come stay for a while – and it’s also all natural and safe. Buying a house? We do Pre-Sale WDO Inspections. Building a new one? Check out our pre-construction treatment. Termites are no joke. Don’t wait to see signs of termite damage. Let us protect you and provide total peace of mind. Call for more details today!