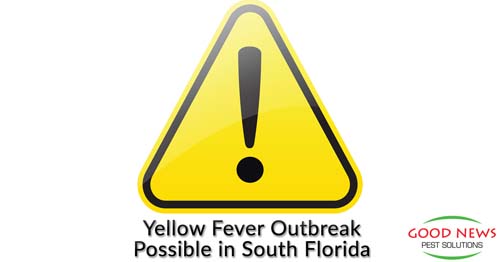 Once again, as rainy season for Florida approaches, Aedes aegypti mosquitoes are in the headlines. And this time, there’s a much larger potential for danger than the one posed by the Zika virus. To be clear, Zika is still a very real threat. Except for the birth defects it can cause in pregnant women that become infected, the Zika virus causes relatively minor symptoms. Yellow Fever, on the other hand, can be deadly – and often hard to diagnose. The last time there was a yellow fever outbreak in the United States was in New Orleans in 1905, shortly after scientists had finally linked the spread of the disease to mosquito bites. In fact, in the past 12 years, only one case has occurred within US borders, and it was travel-related. The culprit is again the Aedes aegypti mosquito, which is also connected to the dengue and chikungunya viruses.

Much like the Zika virus, the area of most concern is Brazil, where in the past 9 months, over 1000 cases and 338 deaths attributable to yellow fever were reported. And while it appears to be somewhat contained at the moment, the Center for Disease Control (CDC) and other experts are warning that there’s nothing to stop travel-related cases from spreading to our shores and beyond. They also warn that because the disease is so rarely seen these days, most Americans are not vaccinated against Yellow Fever.

What Are The Symptoms of Yellow Fever?

Symptoms, include the sudden onset of fever, chills, a severe headache, back pain, general body aches, nausea, vomiting, fatigue and weakness. They appear three to six days after the initial mosquito bite, which makes it harder to track. Plus, most people infected with yellow fever virus have no or only mild symptoms. But for 15% of the population, the disease is deadly. They may feel remission for a day or so, followed suddenly by high fevers, jaundice, internal bleeding and eventually shock and multiple organ failure, leading to death. University researchers in Miami are saying that they don’t expect Yellow Fever to explode the way Zika seemed to just a couple of years ago. For one part, it’s a matter of degrees. When Zika awareness exploded in 2016, there were 100-times more confirmed cases in Brazil than Yellow Fever infections. And also thanks to the Zika scare in 2016, government officials have taken action to keep our mosquito populations even smaller than we have in the past. In fact, although rainy season doesn’t officially start until May 15, some counties have already been spraying since the end of April to try and get ahead of the potential mosquito population growth over the next 6 months. As much as we appreciate the government trying to keep ahead of the curve by battling the mosquito population with DEET and other harsh chemicals, there is a better way.

Our exclusive No Bite Zones technology takes the pregnant momma mosquitoes (the only ones that bite us) and turn them and their offspring into vegans, not craving warm blood. And the effect is transmitted to the next generation as well. That way mosquitoes can continue to fulfill their God-given purpose of pollinating without the threat of spreading deadly diseases. Since we introduced MosquitoPaq in 2016, our customers from Sarasota to North Port have experienced happier, healthier summers of mosquito-bite and chemical-free zones. There’s no time like the present for you to join us in making your yard safe for the whole family. Just give us a call!