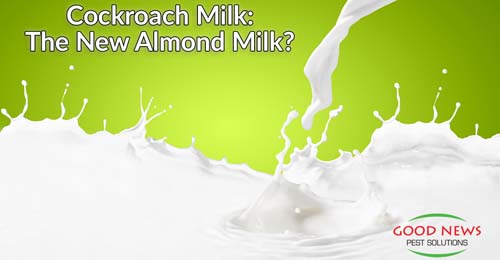 There have been a lot of trends in alternative nutrition in search of better, healthier options for food. This is especially true for those folks who are Vegan, lactose intolerant, and those who suffer from gluten or nut allergies. We’ve seen the rise of spinach, then kale, barley, then quinoa, and now, you can put down that coconut, rice, and almond milk because the latest, healthiest dairy alternative is Cockroach Milk! ?

Pacific beetle cockroaches (Diploptera punctata), one of the smaller species of cockroaches (but not beetles) are native to the tropical forests of the Polynesian Islands, including Hawaii. The beetle cockroach is one of the few insects that gives birth to live young, like most mammals do, instead of hatching from eggs. As a result, the momma beetle cockroaches secrete and feed their babies a yellow, milk-like substance made up of carbohydrates, protein, and other nutrients necessary for baby roaches. Turns out, that combination is also very good for humans. And while some researchers are studying the cockroach beetles to see how their genetic makeup differs from other insects, scientists at the University of Iowa are figuring out how to ‘milk’ the female cockroach beetles. They found ways to extract it both as a liquid and in crystalline form. And they determined a way to keep the insects secreting the substance even after their babies move on. Enter a group of biochemists in India. They took a closer look at the cockroach beetle crystals and discovered that Cockroach milk crystals are among the most nutritious substances on Earth. In fact, the crystals were packed with three times as much protein and calories than the previous record holder, buffalo milk. One of the scientists even tasted it and said it was pretty bland. But it will be a while before Cockroach Milk joins the ranks of super foods at Whole Foods and Trader Joe’s. For starters, it hasn’t been tested by the FDA, and, despite the Iowa research, it still takes considerable effort to milk the cockroach beetles. The India researchers are also experimenting with a new genetically engineered yeast that can produce the same milk as the cockroach beetles. So, we might someday get the power, without the ick factor - fingers crossed. If you find cockroaches or beetles in your home, don’t go trying to milk them...unless you live in the Mauna Kea nature preserve. For the rest of us on the Gulf Coast of Florida, whether you’re in Sarasota or Punta Gorda, when you see bugs in your house, reach out to us at Good News Pest Solutions. We’ll get those creepy crawlies out of your hair with our 100% safe, organic pest control treatments. Just give us a call!