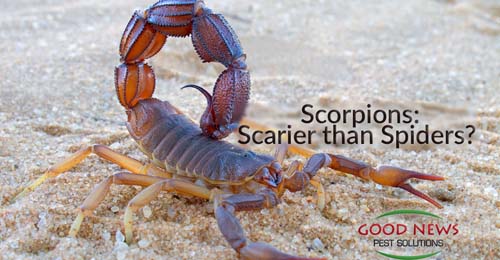 In 1955, the movie Tarantula debuted, the first in an ongoing series of giant spider movies that continues as recently as 2013’s “The Giant Spider.” For decades, both psychologists and arachnologists have studied human’s seemingly inherent fear of spiders, concluding that there must be something programmed into our brains to react the way we do. However, it seems that in recent years, our brains have adapted to react with more practicality than autonomic fear responses. Or maybe they haven’t.

Arachnophobia – the actual medical diagnosis, not the 90’s film – has, along with Ophidiophobia (fear of snakes), been the most prominent primal fears for humans as long as such things have been studied.  Several psychological tests to determine a person’s fears are commonly referred to as ‘Fear of Spiders’ or ‘Spider Phobia’ questionnaires. This is in spite of the fact that spiders are generally not much of a threat to humans.  They’re “easily squishable and few are harmful to humans,” according to spider-researcher Rick Vetter, at the University of California, Riverside. For years, he has wondered why people were more afraid of spiders than another member of the arachnid family: scorpions, whose venomous stings cause severe reactions, including immediate searing pain, and can even lead to death. “…scorpions would be a much better candidate for aversive reaction than spiders. But as an arachnologist, I rarely hear about peoples’ fear of scorpions.”

So Vetter decided to put his theory to the test, utilizing Universities in five states to run more than 800 students through the Fear of Spiders Test, then the same test with ‘spiders’ changed to ‘scorpions.’ As expected, fear of spiders among women was higher than that of men, and fear among students studying spiders was lower, although some students were triggered just by the mention of spiders in the questions. What they didn’t expect was that by a significant margin, the majority of students found scorpions to be scarier than spiders – especially in Wisconsin, where no scorpion species live.

Luckily, there are only three species of scorpions on the Gulf Coast of Florida, and none of them are deadly. Check for them when you’re feeling groovy – they show up under UV blacklights. Other than the possibility of being stung, the other bad thing about spotting a scorpion in your home is that their primary food source is insects and their favorite is Termites. So if you’re seeing scorpions, you may have a more significant problem. Treatments for termites usually chase the scorpions away – and hopefully save your home. But don’t wait to see the signs. Protect your home now with our Term Assure 365 – it provides the best termite protection, takes care of other creepy crawlies three times a year, is 100% safe for your family, and comes with a $1-million guarantee. Since Florida is the #1 state for termites, every home has a high likelihood of a termite infestation; don’t find out the hard way. Be like your neighbors in Lakewood Ranch and Punta Gorda and call us today!