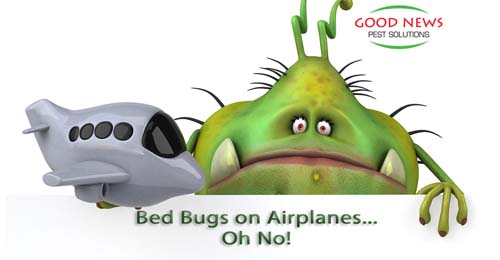 The 1950’s was rife with B movies that forced unprepared heroes and heroines to face giants spiders, scorpions, and other assorted insects and arachnids. But they never had to face the horrifying threat that is suddenly becoming all too real – bedbugs on airplanes!? Even Samuel L. Jackson isn’t able to help. We’ve pointed out before that Cimex lectularius are by no means restricted to beds in homes and hotel rooms. Curtains, laundry and discarded furniture are all potential havens for bedbug infestations. And now, apparently, they’ve spread to international flights. As if the French need another reason to dislike Americans...

Just last month, two separate passengers on different days complained about being bitten on the New York to India flight on Air India. And last year, British airlines fielded similar complaints. And as far back as 2010, United Airlines had complaints of bedbug bites on their flights. But it’s probably not entirely the airlines’ fault. Most people don’t notice bedbug bites right away. And, because bedbugs can lay dormant without a food source, many will nest in dirty clothes packed in a suitcase – or even the outside seams of your suitcases. With more passengers choosing to go solely with carry-on luggage, it’s easy for the little guys to spread while in flight. The good thing is, contrary to some popular rumors being spread on the Internet, bedbugs cannot fly or spread diseases to humans, like mosquitoes and ticks. They are, however, becoming more resistant to a lot of the pest control chemicals and methods that have been applied over the years.

Don't Try This At Home!

For example, don’t try pouring rubbing alcohol on your furniture. It’s not an effective killer of bedbugs, and it makes your home much more dangerously flammable. In fact, it’s getting to the point that most DIY methods of ridding yourself of bedbugs are so ineffective that they only lead to more problems! Luckily, we can help. Here at Good News Pest Solutions, we have the best and most effective methods of dealing with bedbugs and other annoying insects. And we have thousands of customers from Ruskin to Punta Gorda that confirm it. If you’d like to learn more about any of our products and services, just give us a call!