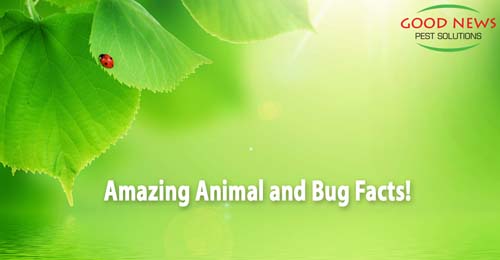 On the Netflix TV show Atypical, a boy with high-functioning autism uses his obsessive love for penguins to help him adapt to situations that he would normally find distracting or disturbing. Throughout the first season of the show, he focuses especially on one trait of most penguin species – the fact that they will use a pebble as a symbol to mate for life. Of course, since it’s a comedy, this gives rise to all sorts of misunderstandings on his and other’s parts. But it turns out, at least for Gentoo penguins, this is absolutely true. While some penguins are serial monogamists, the male Gentoo penguin will drop a pebble at a female’s feet and if she accepts it, they become penguin husband and wife. We’ve shared in the past some of the more interesting facts about insects and rodents. Here are some more astonishing things about the creatures that share our planet.

I Want to Hold Your Hand

Didn’t like the Penguin Pebble Proposal? How do you feel about Sea Otters? When sleeping, mother sea otters will hold hands with her pup to keep it from drifting away. They also wrap kelp around themselves and use it as an anchor to stay in the same place while sleeping.

The Ears Have it

While it’s not universally true – there are some variations – chickens lay eggs that coincide with the color of their earlobes. The ears and their lobes can be located under feathers towards the back of the head. Chickens with white earlobes lay mostly white eggs. Chickens with red earlobes lay primarily brown eggs. And I don’t want to even see the ones who lay Easter eggs… (In truth, Easter Egger Chickens lay a variety of blue and green colored eggs!)

Who Rules the World?

Be Still My Beating… Head?

Shrimp who experience headaches have a real problem. They can’t tell whether it’s a head problem or a heart problem. Okay, technically, their heart is right behind their heads, but since we can’t see that part of the body beneath their exoskeleton, it’s close enough.

If a canine ever committed a murder, chances are investigators would dust for nose-prints. That’s because dog’s noses are as distinct and unique as a human’s fingerprint. Of course, no dog that we know would be a killer – unless you count loving you to death!

If a mad scientist or nuclear explosion does suddenly make ants the size of houses, look out! Biologists estimate that more than 10-quadrillion ants live on the earth. To put that into perspective, that’s 1.4 Million ants for each and every human being on the planet.

In their quest to understand humans more through studying rats, it isn’t all mazes and needles. Scientists also tested their funny bones… sort of. Turns out rats are as ticklish as human children, giggling and expressing themselves in joy jumps. Chimps, guinea pigs, dogs and foxes also jump for joy when tickled or excited.

How do you tell if a goat is an American or a British breed? Just listen to their accent! In one of the weirder studies we’ve read recently, a researcher from London has established that goats from different regions have different accents. He believes it’s connected to forming connected communities. No word on whether some female goats are more attracted to certain accents.

Talk about survivors. Cockroaches can actually live for a couple of weeks after being decapitated. And not only can they survive a nuclear attack, they’re also probably the oldest creatures on our planet. The earliest fossil record of a roach dates back to 350-million years BC – 150 million years before the dinosaurs walked the earth! Of course, those cockroach facts are far less interesting when they’re hanging out in your home. That’s why we created our Go Green Plus 3. Three in-depth, organic and safe for the family treatments keep the creepy crawlies out of your home year round. And we’ll always make a return visit if one of them slips through the cracks. Happy customers from Bradenton to Port Charlotte rely on us to take care of their pest problems. For more information, give us a call!