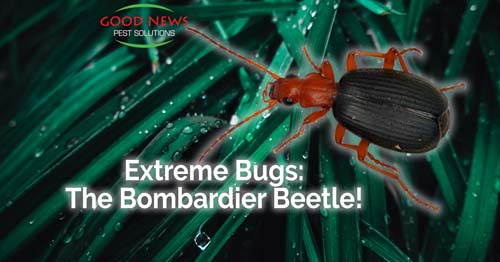 There are many amazing things in creation, and we’ve explored many you can find in the insect world in our past articles on Extreme Bugs. This month we have a particularly interesting bug with an unusual defense mechanism that could blow... your mind. Found in woodland and grassy areas all over the world, the Bombardier Beetle is named for their explosive ability to not only protect themselves, but turn the tables on prospective attackers.

Picking Them Out of a Crowd

Genus Brachinus is classified part of the Carabidae family, also known as ground beetles. They tend to have a shiny black or metallic, ridged wing covers. They exhibit a groove on their foreleg with a series of hairs, like a comb that they use for cleaning their antennae. Their head and thorax can vary from reddish brown to a darker, almost orange color. In some cases, the wing covers will also exhibit some coloration matching the rest of the beetle. And a few, based on their habitat, have bright green ridged wing covers that extend over a good portion of their abdomen. The variety of looks is due to there being at least 500 different species of Bombardier Beetles on every continent but Antarctica. Some are as old as the dinosaurs.

Most Bombardier Beetles are carnivorous like their predators. But what truly makes the Bombardier Beetle unique in the insect world is their body’s response to DANGER. Contained within their abdomen, under their hard ridged wings, are three very special compartments. The first contains hydroquinone, a form of benzene. Benzene is found in natural oil and is used to make solvents, plastics, and some more noxious pesticides. Outside of the beetle, hydroquinone specifically is used to develop photographs. The second chamber has a reservoir of hydrogen peroxide – the same thing you use to clean wounds. The fizzing effect that happens when you pour it on wounds is because of an enzyme called catalase breaking down the hydrogen peroxide. When the Bombardier Beetle feels threatened, it releases the benzene and hydrogen peroxide into a smaller chamber that is lined with catalase. The same process that cleans your wounds causes a very hot, very volatile reaction in the beetle’s abdomen. Almost instantly the temperature rises past the boiling point, creating an expansion. The beetle naturally battens down its internal hatches to protect itself and opens a tiny portal in its backside, sending an explosive stream of hot acid towards its attacker. This all happens in a little more than one-tenth of a second! The acid irritates the eyes and throat and often kills the would-be predator. Then the beetle reloads in case it needs to attack again. It can fire up to 20 times in a row and with a considerable degree of accuracy. In fact, some African Bombardier Beetles can angle up to 270-degrees, even shooting between their own front legs!

While the acidic chemical reaction that the Bombardier beetles shoot can be irritating to humans, as long as you leave them alone, they will not attack you. In fact, since the chief food source for Bombardier and other ground beetles is other, more annoying insects, there’s no reason to bother them. Just leave them to act as a source of natural pest control. Now, while we don’t have any Bombardier Beetles on the payroll, we’re happy to let them do their jobs while we use our own risk-reduced and pesticide-exempt pest solutions to the most common pests in your home and yard. We call it our Perimeter Plus program. It’s the greenest pest solution you can find on the Gulf Coast of Florida, as our customers from Parrish to North Fort Myers can attest. If you’d like more information or to set up an appointment for one of our highly trained solution technicians to come out to your home or business, just give us a call!