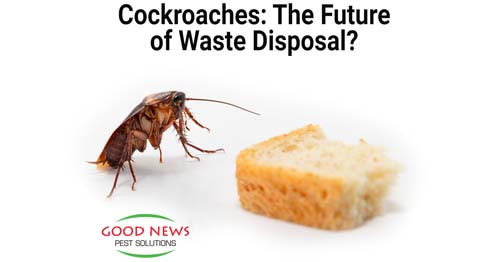 Cockroaches: The Next Garbage Men?

For most folks the thought of flicking the lights on and seeing literally millions of cockroaches fleeing to the corners of the room would be enough to send them out of the building forever. After all, useful and productive are not the terms that first come to mind when you think cockroaches. But Government officials and some scientists in China have managed to set aside their preconceived notions of cockroaches – or at least found ways to use them to their advantage.

Yield Instead of Landfill

Faced with handling the refuse needs of their still growing population, many Chinese cities have taken to harvesting cockroaches by the billions and putting them to work. In one Chinese city with a population of more than 7-million people, researchers are feeding cockroaches kitchen waste. And it's disappearing: the roaches devour the equivalent weight of seven adult elephants – more than 50 tons – EACH day! A breakout of African swine fever led to a nationwide ban on using food waste to feed pigs, once the number one consumer of leftovers. And what once was an experiment became that country’s solution for mounting waste.

But that’s not all.

The cockroaches have a life span of about 6 months to a year and a half. Luckily, in this case, roaches reproduce rapidly, generating around 130 offspring in that time, so the population is always replenished. Once the roaches die, however, they become a source for protein rich food for livestock and pigs. In fact, the cockroaches’ system filters out the toxins and diseases in the food waste. Essentially, their bodies become safer to eat than their previous food supply.

We all heard the stories about how cockroaches can survive a nuclear bomb. Or at least that there were roaches in Hiroshima and Nagasaki that quickly returned after World War II. But Chinese scientists are saying that by extracting something from the cockroach, they can use the insect’s resilience to heal us. According to private researchers, essence of cockroach is good for curing oral and peptic ulcers, skin wounds and even stomach cancer. It’s also being extensively tested for use in beauty masks, diet pills, and even hair-loss treatments. In fact, many villages in China are slowly starting to become more prosperous raising cockroach farms and selling the roaches to fisheries, pig farmers, and pharmaceutical companies.

Meanwhile, Back at Home…

While farming cockroaches works for the folks in China, we’re a little more conservative here. Most of us would rather the roaches stay far away from our homes and businesses. And we don’t blame you. If you think you have a problem with roaches, silverfish, ants, or other common creepy crawlies that are better left outside the home, give us a call! We’ll be happy to explain how our Perimeter Plus Green Pest Solution keeps your home and family safe. Both from bugs and the harsh chemicals that some other pest control companies use. Our customers from Lakewood Ranch to Port Charlotte can tell you how much they love our green, risk-reduced pest solutions – and how effective they are. We’re thrilled to be celebrating 30 years in the pest solutions business and happy to have you as current and future customers.