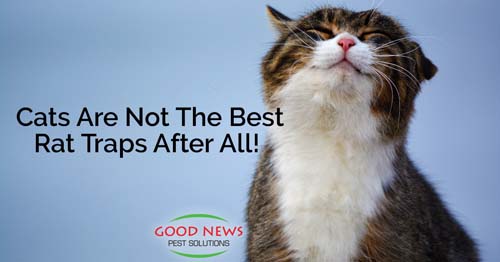 Cats Are Not the Best Rat Traps After All

The fun of living in a world filled with entertainment is the tendency to adopt certain ideas as being accurate. When, in fact, we have no proof. Worse, we may think a particular viewpoint is true when in reality, it’s completely false. For example, did you know that you’ve got a 10% better chance of being bitten when you have a bug zapper than not? The light actually attracts more bugs, while only killing 4-6% of them. How about this one – Rats and mice LOVE cheese! While they will eat it, rodents, like most humans, are far more interested in sugary snacks, which is why peanut butter is a popular mouse trap enticement. How about an idea as old as the pyramids? After a groundbreaking study completed a couple months ago, scientists now have definitive proof that cats do not scare away rats!

While they’ve now found proof that rats likely didn’t cause the Black Death in Europe, they’re still on the hook for spreading hundreds of other diseases, ruining our food, and destroying our property. Yet, despite the fact they live on the edges and in the shadows of human existence, we don’t know that much about them. The National Pest Management Association spent several months studying rat behavior. They studied reactions to smells, tastes, and living behaviors. Anything that might help find better and more humane pest control solutions.

What they found was that rats do tend to hide when cats are around. For a day or two. Then they come back. And while feral cats were spotted exhibiting stalking behavior, only 1% of cat-rat interactions ended with a dead rat. Also, although the studied rats fled when they saw a cat, they were 20% more likely to burrow into surrounding buildings. And once inside, they’d start building a nest. Instead of helping, cats made the rat problem worse by driving them into buildings.

Who Moved My Cheese?

On the other hand, researchers learned that male pheromones attracted rodents initially, but then they would avoid the area. If they mixed male and female hormones together, they were even more attracted. But the strongest response came from female only scents. Female pheromones attracted both male and female rats, and in larger numbers. The conclusion? Don’t rely on your feline friends to keep the rats at bay. And, as you might imagine, you can’t just pop down to the hardware store and pick up female rat pheromones. That’s where we come in. Good News Pest Solutions Premier Rodent program has been removing rats and mice from homes and businesses for our clients from Lakewood Ranch to Port Charlotte for 30 years. We also make sure the surrounding area is free of any rodents that might want to try sneaking back in. For details on the program and to sign up, just give us a call!