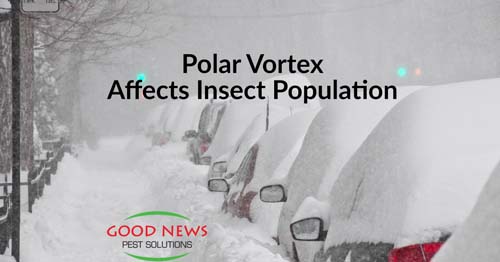 Polar Vortex Did a Number on Bugs!

The winter weather we’ve seen in Florida this year has been some of the most convoluted ever. Of course, we can’t help but notice that, as strange as it’s been, our neighbors to the North have been surviving a much harder time of it. It may not be unusual for North Dakota to drop into double negative digits, but when it stays that way all day, that’s a problem. Not to mention, Illinois, Minnesota and 4 other states in the Midwest are charting record-breaking icy temperatures as much as minus 77 degrees.

But there is a potential bright side to the freezing weather – and no, we’re not talking about snow-blindness. According to our friends at the National Pest Management Association, several invasive species of insects may also be affected. Not built for surviving long-term in the colder temperatures, many of these aggressively intrusive bugs may not return after the cold snap. Native insects have a slight advantage here. Their bodies undergo a process scientists call diapause. Which means, simply, that the bugs hibernate in some form or fashion, usually under cover, until the weather has passed. Some can even withstand really cold temperatures, down to minus 30, for short periods of time.

Researchers say we won’t know the full impact – for good and bad – until the spring thaw. Some invasive species adapt over time, and some typically prepared bugs might have gotten caught unawares. There’s also several species who may have laid eggs that will only hatch when it gets warmer. That’s also not taking into account any affect the weather has had on future crops and foliage. Insects food supplies and habitats might be compromised as well. Back here in Florida, while the temperatures may not be dipping as much (especially today!), we’ve seen a lot more rain early in the year. Just like we’ve adapted away from the cold, the insects around us are similarly affected. And this year’s El Nino will only make that worse the rest of February and March. There’s a chance you may see ants and other insects seeking shelter and food in your home. Researchers are also predicting that we may see more cockroach activity on the Gulf Coast of Florida this spring and into summer.

There’s no better time to sign up for our top of the line Perimeter Plus program. As the rains continue to soak the ground, you’ll want to protect the inside of your home from insect invaders. We treat your home with 100% natural, reduced-risk pest solutions, then return at least every three months to check and refresh everything. It’s worked great for our customers from Ruskin to North Fort Myers. And we’re always happy to bundle it with our premiere termite protection – the only one with a $1-million damage warranty. For more details, or to set an appointment, just give us a call!