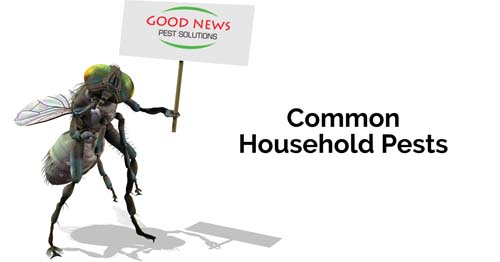 Common House Pests: The Cockroach, The Housefly, and The Spider!

It’s always exciting finding a new and interesting bug around your home or work. Ok. So, maybe that’s just us. Regardless, with all the insects that our clients ask us to take a look at that they’ve never seen before, there are a few that everyone deals with. Yes, even us in our own homes.

You’ve probably heard the stories, that the cockroach will outlive us if we ever encounter a nuclear holocaust. That’s not entirely true. The story comes from the fact that after World War II, cockroaches were among the only inhabitants of Hiroshima and Nagasaki to survive the nuclear attack there—which speaks more to their body chemistry than their viability. Despite being as old as the dinosaurs, cockroaches molt only about once a week. So it’s harder for the radiation to kill them off. Add this to the fact they can hold their breath for 40 minutes and live for a week without their head? Suddenly they’re the villains of a Saturday morning science fiction movie. They come into our houses because they like warm, damp areas – you know, Florida during rainy season and kitchens and bathrooms the rest of the year. Usually they come in through drains and pipes, which is a whole different nightmare. Luckily, as resilient as they are, you can take preventative measures by keeping kitchen areas, especially cooking surfaces, clean. Make sure dry goods are sealed in containers and throw out any old cardboard boxes.

Funny story. Everyone worries about cockroaches spreading diseases. But they’re amateurs when compared to the common house fly. Because of how flies eat, poop, and give birth, they come into contact with – and spread – tons of nasty diseases like Salmonella and e coli. Houseflies can taste with their feet. Which sounds cool until you realize THAT’s why they’re tromping all over your food. The strange thing is, they don’t have teeth, so they have to drink their food. Did we say strange? We meant disgusting, because they make it liquid by regurgitating their digestive juices on solid food. That’s right, the flies vomit on our food to make it edible for them. And often poop at the same time, or even where they eat before they eat. Houseflies only live for about 30 days – unless you’re lucky enough to snap them up with your chopsticks, Mr. Miyagi style. But in that 30 days, they can lay up to 500 eggs. And of course, they lay those eggs in rotting fruit, feces, and dead carcasses - one of the other reasons they’re so great at spreading diseases. They can also see all the way around themselves and spot things more than four times faster than we do. No wonder they’re hard to swat! The good news is, the same kitchen cleaning that keeps cockroaches away also limits places for flies to feed and breed. So, I guess we know what you’re doing this weekend! ?

Finally, let’s talk about spiders. While they get a bad rap, and invoke a fair amount of fear, spiders are actually one of the better “pests” to have around the house. For one thing, they catch and eat those nasty houseflies. And other than a few select species (Black Widow, Brown Recluse, etc.), spiders are harmless to humans. Unlike the housefly, spiders, despite their eight eyes, are generally near-sighted. They gather information primarily through sensors in their feet. They taste, smell and even detect and translate vibrations—to the point that they can even detect what kind of prey has gotten caught in their webs. Some spiders even tune their webs like musical instruments. They don’t just spin webs, either! Spiders produce seven different types of spider silk – all for different purposes. They can jump up to 50 times their own length and produce 3000 eggs at a time! I know, this isn’t reducing the creepy factor at all, is it? But, again, spiders are natural pest control solutions for roaches, earwigs, mosquitoes, flies, moths, fleas and even other spiders! But if you are really looking for ways to keep even the cool spiders out, cats, mint, white vinegar and citrus will all send them packing. Cedar chips around the outside of your house will also repel them before they get inside. For more cool info on where bugs lurk in your home, check out this interactive infographic from our friends at PestWorld!

Of course, the worst bugs in your house are the ones you don’t want there! Sometimes even your best efforts to clean and prevent creepy crawlies from coming in still leave you with a bug problem. Never fear, we have Good News! Our most popular Go Green Perimeter Plus Program keeps the most common (and a few uncommon) pests from infiltrating your home, and we only use 100% organic, risk-reduced products. It’s working for our clients from Bradenton Beach to North Port every day! For more details on this or any of our green pest solutions, just give us a call!