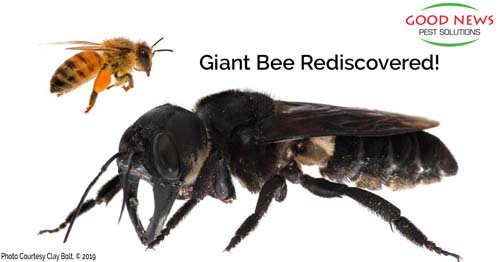 It looks like something out of the plot of one of those Saturday science fiction monster movies. But “Wallace’s Giant Bee” wasn’t created by some mad scientist bent on world domination – or a Hollywood special effects artist.

The Bee was first discovered in 1859 by prominent biologist & anthropologist Alfred Russel Wallace. He is best known for developing a model of evolution through natural selection almost simultaneously and independently of Charles Darwin’s research. Interestingly, he delved deeper into natural selection than Darwin. And he maintained that our human intellect was not the result of evolution, but of something “different and non-material.” He also wrote an extensive treatise on the possibility of life on Mars – the first to do so in 1907!

With a wing span of 2-1/2 inches, the Megachile pluto, dwarfs others of its species. By comparison, the average honeybee measures around a half an inch, or a little smaller than a paperclip. The large Indonesian resin bee’s body, as you can see in the photo above, looms more than five times as big. In case the size doesn’t give it away, it has distinctive pincher jaws, similar to a stag beetle. It also sports a thick white band on its abdomen. They also tend to be loners, rather than spending time in a hive as their cousins. Instead, they have a symbiotic relationship with termites, sharing their tree mounds. Unfortunately, for more than 100 years after Wallace’s discovery, no one had seen the insect. In 1981, an entomologist discovered six of the “Giant Mason Bee” nests on the island of Bacan.

The bees were again presumed extinct after disappearing for almost 40 years. In fact, the Global Wildlife Conservation group lists it as one of the 25 "most wanted" lost species. But in 2018, a dead specimen sold on eBay, of all places, for more than $9000. Scientists are afraid that even more of the rare bees may be exchanging hands on the dark web. The most recent sighting was a happy one, though. Clay Bolt, a nature photographer, who specializes in photos of bees and wildlife, discovered a live Wallace bee earlier this year. Bolt joined two biologists and a writer on an Indonesian expedition, searching for evidence of the bee. On their final day of exploration, they located their target. The searchers photographed and filmed the bee, then released it back to the wild. After all, bees were created for the purpose of serving our environment—even the giant ones! Here at Good News Pest Solutions, our purpose revolves around offering the most effective, yet family-friendly and reduced-risk pest solutions. For 30 years, we’ve helped our customers from Parrish to Punta Gorda rid their homes and businesses of insects, rodents and bats in a way that protects you and the environment. If you’d like more information on any of our programs, just give us a call!