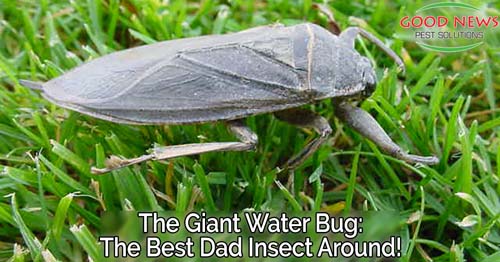 The Giant Water Bug: The Best Dad Insect Around!

On the third Sunday in June, we celebrate and honor Fathers everywhere. Other countries also have special celebrations for Dads, but believe it or not, Father’s Day was instituted in the United States less than 50 years ago.

There have been a number of famous fathers over the years – Bishop Milton Wright (Orville & Wilbur’s dad), Atticus Finch, Ezekiel Dodge (father of 11, including the car makers) , Don Corleone…

But none are quite so protective of their young as the Giant Water Bug!

We all know about the bond of motherhood. But the Lethocerus americanus takes his fatherhood duties just as seriously. After they mate in the late spring to early summer, the female water bug lays eggs, usually on the stems of grasses and plants that grow just above the water’s surface.

The father then takes responsibility. He remains near the eggs for their two week gestation period, crawling out from the water and over the eggs, making sure they stay properly hydrated. If he detects a threat, he’ll actually gather the eggs on his own back and swim away for their protection.

If the threat follows him, he’ll lunge and grab with his sharp, hook-tipped front legs and bite. This response has garnered them the nickname ‘toe-biters.’

Lunch Party for One

That’s also how the insects hunt. The water bug will sink his needle-like mouth parts into the offending party and begin injecting toxic enzymes. The enzymes both poison the bug’s prey and begin to digest it. Then the water bug sucks the predigested soup back into its mouth, leaving an empty skin behind.

Interestingly, while giant water bugs are in their five larvae stages, they absorb oxygen through water. But once they reach adulthood, they have to get their air the same way we do. They utilize a snorkel-type appendage that draws air into a pocket under their wings where they breathe it in and out.

Blinded by the Lights

When encountered outside their natural habitat, a Giant Water Bug is sometimes mistaken by people as a large mutant cockroach. In fact, the bugs often range at night, and it’s believed that they instinctively use light to navigate by when searching for mates or new bodies of water. This worked fine before light bulbs became popular. But now the insects either follow artificial lights, or get confused by them, and often end up stranded on corners under street lamps.

If you do encounter one of these creatures, just leave it alone or carefully pick it up and guide it back to water. While it can’t eat you, their bite is rather painful.

As for other annoying insects in your home or yard, why not try our 100% organic, risk-reduced Go Green Pest Solution? Our year-long protection is the most popular product for our customers from Lakewood Ranch to North Fort Myers, and can also be paired with our warrantied termite protection. For more details on either product, just give us a call!