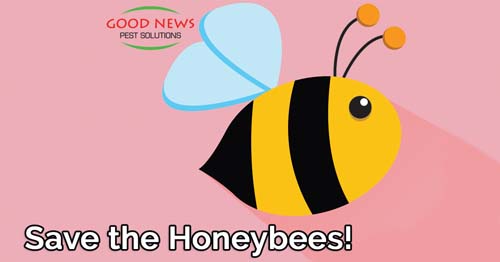 How to Help Save the Honeybees!

There is so much that we have yet to learn about the other creatures God placed on planet earth with us. It seems every day we’re discovering a new species, or a newly discovered underwater creature, or new facts about insects that we thought we knew pretty well.

Did you know a recent study found that bees can do basic math? They can also identify faces, learn to tell the difference between painter’s styles, and even time travel! Well, technically, their brains just age in reverse when they take on certain jobs in the hive. But still!

Sadly, one of the things we’re still struggling to figure out is why honeybee hives are declining rapidly, although we’re pretty sure it’s not aliens. But while Scientists study the larger problem, one inventive man in Great Britain is trying to help out, one bee at a time.

Dan Harris noticed that he was seeing more and more bees lying on the sidewalk. They moved slowly and often narrowly missed being stepped on. He did some research and realized that because bee metabolism is so high, some bees run out of steam before they can make it home to the hive. Or, in large urban areas, even another flower.

Taking to his workshop, he devised a workable solution: A plastic card that fits inside your wallet with three tiny cells of sugar solution - enough nourishment to hopefully get a stranded bee back in the air and headed home.

We all know just helping one bee isn’t going to do much, and Harris is already dreaming bigger.

200 prototypes turned into a crowdfunding goal of £8,000 to manufacture the cards. In just 36 hours, they’d surpassed that goal.

When the campaign ended on May 23, almost 2,000 people from across the globe had not only donated, but joined a community committed to helping bees and being more connected to the world around them.

And the good news is, this is just the beginning. Harris plans to install a bee hive within his home city of Norwich to educate more people about bees. The cards are fully recyclable. They ship with a return envelope that allows old cards to be reused, reducing the need for more plastic.

While the crowdfunding campaign has now ended, you can follow the Saviour Bees progress on their Facebook page, where new opportunities to join the newly formed coop will be posted.

In the meantime, you can do your part by minimizing the chemicals you use in your home. In 2018, we did a year-long series on living greener. The decline of bee hives is almost always connected to chemicals and pesticides.

That’s also one of the reasons we only provide 100% organic, risk-reduced pest solutions. We want to get rid of our clients' annoying insects, not the ones we need to sustain the planet God gave us stewardship over.

But don’t take our word for it. Our clients from Apollo Beach to North Fort Myers will tell you that the natural solutions are even more effective. If you’d like to learn more, just give us a call!