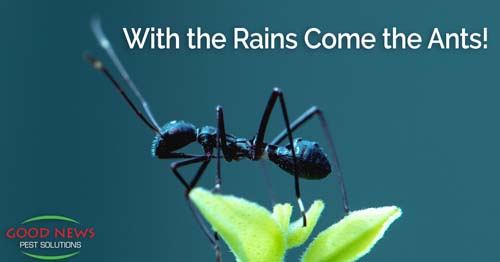 With the Rains Come the Ants

After the sweltering heat we’ve been dealing with this early summer, the return of the afternoon rains seems like a refreshing change. But the rainy season brings its own challenges. Two of our most “popular” insect pests begin to become a problem when the rains come – mosquitoes and ants.

Today, we’re going to talk about the ants.

As you might imagine, for the most part, ants tend to prefer being outside almost as much as we like them to stay there. But when the daily rains start building up, many colonies look to find dry spaces – which happen to largely be in our homes. While there are dozens of different ant species that are found throughout the Sunshine State, we’ll just focus on the 6 most troublesome varieties that you’re likely to encounter.

Let’s start with our least favorite of the Formicidae family. Red Imported Fire Ants are an invasive species from South America that we just can’t seem to get rid of. If you see an ant mound in your yard on the Gulf Coast of Florida, the odds are very high that it is a fire ant mound. These ants are best known for their bites. When disturbed, the fire ants grab hold of whatever they can, then proceed to inject venom through their stinger. Just being bitten is painful, and because the ants cling tightly and attack in numbers, hard to escape from once you’ve gotten their attention. For some people, it’s worse. The venom kicks off anaphylactic shock that can lead to death.

Fire ant mounds often have 100-500-thousand worker ants, serving multiple queens, so it is very difficult to remove a mound. Plus, the species is more resilient than other ants and can quickly return to insecticide-treated areas. There are lots of home remedies on the market, but none that are entirely effective, especially in the long run. If you have fire ants, you’ll need to have your yard professionally treated and maintained.

Big headed ants look a lot like their cousins, the fire ants. They range in color from yellow to dark reddish brown and, as the name implies, their heads are a bit oversized. The biggest difference between the two species is that big headed ants don’t bite. While they tend to build colonies outside, these are the ants you’ll find climbing up your walls and wedging their way in through the cracks and seams looking for sweet food. You’ll usually spot them inside in your pantry or kitchen.

Speaking of the kitchen, the other ant variety you’re likely to encounter there are ghost or sugar ants. They’re tiny, almost see through and LOVE sugar and water. You’ll usually see them on your countertops close to the sink, around the faucets, near the fridge, or food preparation areas. Once they’ve found a place, they may start building a colony in the back of your cabinets or the crevices in between.

Carpenter ants are some of the largest ants you’ll ever come across. Since carpenter ants make their homes in damp or decaying wood, they are sometimes mistaken for termites. Often a leaky roof or foundation will draw the ants in. Then they burrow deeper into the wood, which can weaken it. You may see some winged ants as well. Carpenter ants do sometimes bite or sting, so be careful if you see them.

White footed ants are relatively new to Florida but are quickly becoming an issue. They don’t bite, sting or cause structural damage. But they do breed rapidly, and once they’ve nested in your home, are not likely to leave, except to forage outside. These are the ants you’ll see marching along your countertops, baseboards, walls and ceiling corners.

Also called raspberry crazy ants, this invasive species tends to stay outdoors. But when the floodwaters rise, they will gladly infest your drier home. They are reddish brown, and about a 1/8 of an inch long. They get their name from their apparently random travel paths – moving crazily around. While they don’t bite, their bodies emit a chemical that defends them against fire ants, which may also sting you. They love sweet foods – sugars, flours, crumbs.

Tawny crazy ants have no natural predators in Florida, and colonies can grow extremely rapidly. However, sometimes the first sign you may get of an infestation is an electrical short. For some reason, the ambient energy from electricity and electronic components attracts the ants and they build around it, causing issues. Crazy ants are also extremely resilient and can adapt to home remedies, leaving you with an even larger infestation.

The good news is, no matter what kind of ants you’re running into, we can help! We’ve been taking care of ants in homes and yards in Florida for 30 years, from Parrish to Punta Gorda and we know the best, organic, risk-reduced methods to protect your family and pets from ants. To schedule an appointment to learn more about our year-round Go Green Pest Control, just give us a call!