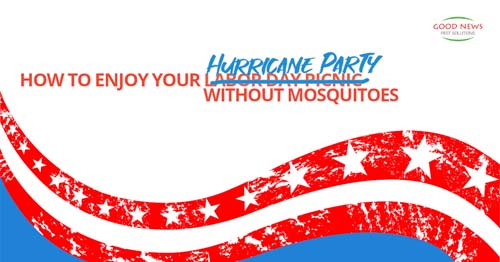 How to Enjoy Your Labor Day Picnic Without Mosquitoes

Editor's Note: Surprise, surprise! It looks like Hurricane Dorian might be crashing everyone's Labor Day picnic this weekend, but we thought we'd go ahead and share this post anyway for your picnic Hurricane Party (We actually really hope you won't be outdoors if it's dangerous!) or your next Labor Day picnic! Stay safe, everyone!

Monday, September 2nd will mark the 125th anniversary of the first nationwide observance of Labor Day. Across America, men and women will take time off from their work. Many will celebrate with their families and friends; maybe with a picnic or barbecue.

But have you ever wondered how we ended up taking a day off of work to celebrate work?

It All Started With a Cotton Mill

Shortly after the ratifying of the Constitution, the newly formed United States started growing rapidly – both in technology and population. While the men that fought for our freedom had largely been from farms and ranches, people started moving into and growing larger cities.

Places like Philadelphia, Boston and New York, centers of the rebellion, were now the place to be.

Then in 1790, Samuel Slater and Moses Brown borrowed liberally from British designs and built the first American water-powered cotton mill in Pawtucket, RI. As the new industrialized technology spread, new villages and cities sprang to life around them to provide the workforce.

The Family That Works Together…

Much like had been done in England, the mill owners began hiring children as young as 5 and 6 to operate the machinery. In fact, to cut costs and keep production high, whole families would be enlisted. This way, no one complained about the 12 (or more) hour days, seven days a week. Some even provided Sunday School for the children.

Immigrants flooded into cities, seeking the freedom and equality that was purported to come with the American dream – generations before the term was officially coined. Unfortunately, many of them found themselves at the mercy of the industrialists and company towns.

In the 1880’s, several worker’s groups began speaking out and rallying the employees to demand better rights from their corporate overlords. On September 5, 1882, some 10,000 workers took unpaid time off to march from City Hall to Union Square to protest working conditions.

Unfortunately, peaceful outcomes were rare in this time. Often workers who had gathered and police officers sent to disperse them both ended up hurt or dead. After the New York march, many large cities adopted a workingman’s holiday. But the federal government would drag its feet, until a railroad strike affected the entire country at once!

125,000 workers walked off the job. Across the country, sympathy strikers interrupted other railroad work. The President ordered the Army in to break the strike. At least thirty people died. Even more were wounded.

A Bull Becomes a Law

In an effort to offset negative perceptions and bring the country back together peacefully, President Grover Cleveland and Congress passed a law marking the first Monday in September every year as Labor Day.

Many cities hold parades echoing that first march in New York City, some have fireworks and concerts as well. In the 125 years, the annual celebration has even weirdly affected the fashion world.

Of course, we'll be closed here at Good News Pest Solutions. While some companies eschew tradition, it’s important to us to let our employees enjoy themselves with their families.

But the real good news is, thanks to advances in organic pest control, you can have your picnic or outdoor BBQ without our friendly neighborhood biting mosquito.

If you haven’t tried it yet, you’re missing out. Our No Bite Zones Mosquito Protection Program transforms biting momma mosquitoes, and their offspring, into vegans. One less thing to worry about on your day off! Our clients from Lakewood Ranch to Punta Gorda love it! If you’d like to learn more or schedule your appointment, just give us a call today!