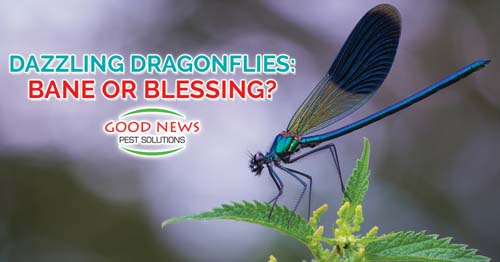 It seems like every year, at least one of our local news stations comes out with bigger and better weather detection technology. Not that we necessarily need it.

We know that here in Florida during the summer it’s going to rain every day at about three o’clock. Hurricanes are now detected and modeled and paths predicted weeks before they get to us. But we still get SkyTower Radar, Max Defender 8 and Storm Shield!

Recently, though, meteorologists found a new use for their fancy radar systems – detecting insects?

Weathermen in Ohio, Indiana and Pennsylvania spotted a strange, blue cloud on their Doppler systems. It was longer than raindrops and moving in a distinct pattern. They reported the strange phenomenon and through the public’s help determined the cause.

Turns out, swarms of dragonflies, in some cases with birds and other insects thrown into the mix for good measure, were dominating the skies.

Entomologists quickly pointed out that Green Darner Dragonflies, which are located throughout the Midwest, typically head south for winter at this time. They aren’t known for swarming, but weather conditions might have forced them to bunch up more than usual.

Ironically, ancient cultures once used dragonflies as their weather radar. Swarms of the bugs meant rain was on the way. And fishermen to this day still use dragonflies to determine the best places to drop anchor for a good haul.

They Didn’t Start the Fire

Throughout several global cultures, dragonflies have held spiritual meanings for many.

Some believe that dragonflies act as messengers between worlds. For Japanese Buddhists, August marks the celebration of Bon. Spirits of departed family members return to visit on the backs of migrating dragonflies.

Ancient Chinese myths identify dragonflies as the soul of a dragon reborn.

Historically, attitudes towards dragonflies in the European Union tend to be a little darker. Both Germany and Romania share tales of dragonflies associated with the devil or witchcraft. And both nations claim the insects originated from the other country's evil ways.

Prehistoric Celts couldn’t decide if dragonflies were good or evil. In Welsh tales, they work with (or for) snakes. Meanwhile, the Britons believed it was bad luck to kill a blue dragonfly. And the Swedes told stories of dragonflies on the lookout for souls bent towards eternal doom.

Love Them Just the Way They Are

The good news is, we don’t live by those old superstitions as much any longer. And the fact is, whether or not dragonflies let us know about rain on the horizon, they definitely play a positive role in our ecosystem.

Dragonflies can fly in six directions, including backwards. They can fly up to 45 miles per hour, and do it far more efficiently than most other flying insects. Dragonfly fossils – some with two-foot wingspans! – have been found that pre-date the dinosaurs.

But our favorite part of dragonflies is their diet. Dragonflies are a wonderful natural pest solution, as they dine on gnats, noseeums and mosquitoes. In fact, they tend to hang out over wetter areas, meaning they eat the mosquitoes before they even have a chance to mate and go searching for warm blood to eat.

But not everyone gets the advantage of dragonfly pest control. For those mosquitoes that get past the dragonflies, instead of getting bitten or using smelly chemicals to ward them off, why not try something different? Our exclusive Mosquito Protection Program turns biting pregnant mosquitoes - and their future mosquito babies – into vegans! It’s perfect for your backyard picnic or BBQ outing. Just ask our satisfied customers from Lakewood Ranch to North Port! To schedule an installation of a No Bite Zone in your backyard, just give us a call!