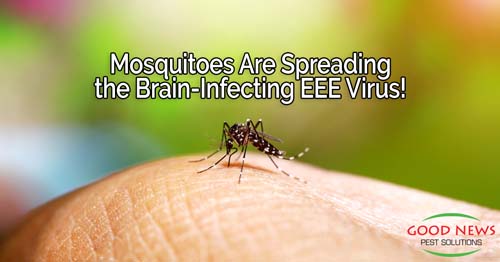 Mosquitoes are carrying yet another virus

It seems like forever ago that the Zika virus was on everyone’s minds. In fact, it was only 18 months ago. And the CDC says that while there is still a threat of Zika infection, mosquitoes are back in the news again for a new and different danger.

In the past year, at least 8 people have died and another 25 have been infected with the Eastern Equine Encephalitis (EEE) virus. That’s more than three times last year’s count. While EEE is not new, health officials say 2019 will be a record-setting year. And not in a good way.

According to the CDC, the United States sees an average of 7 severe cases of EEE a year. The most severe form of the EEE virus infects the human nervous system, including the brain, and kills one-third of its victims. But the numbers only tell half the story.

Scientists at the Center for Vector Biology & Zoonotic Diseases in Connecticut say even more troubling is the rapid spread of the reported infections. Usually cases, especially in the Northeast, are more isolated. This year, at least 6 different states have reported cases so far, and that's not counting those with mild, likely unreported, symptoms.

Researchers say human cases are so rare because the mosquitoes that spread it - Culiseta melanura – live in swampy areas and mostly feed on birds. In fact, the only way humans and horses can be affected is from ‎Aedes aegypti and a couple of other mosquito species that have bitten the infected birds.

But now, the virus being diagnosed appears more resilient, lives longer, and is spreading into cities and colder areas of the country, even spreading all the way up into Canada. Researchers blame milder winter weather and the continued spread of humans into new areas for the expansion.

There’s also a chance that the EEE virus that lives year-round in the Everglades might have begun to mutate. Still primarily found in birds, even with more humans and horses infected, we don’t pass the virus on to anything else – not even other mosquitoes.

As usual, the CDC is cautioning people to cover up and use insect repellents to ward off mosquito bites. The good news is that there’s an even better way to protect yourself. Our exclusive Mosquito Protection Program turns biting mosquitoes – and their soon to be born babies – into vegans, naturally.

If you’d like to learn more about our No Bite Zones or schedule your appointment for any of our all-natural, risk-reduced pest solutions enjoyed by folks from Bradenton to Port Charlotte, just give us a call!