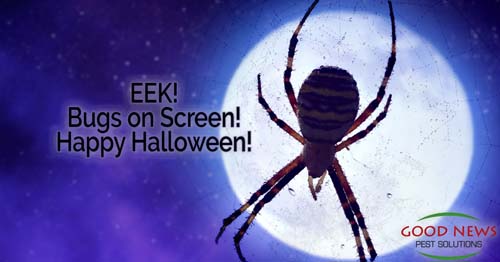 Trick or Treat! Insects Terrorize the World on Screen!

Ever since they started making “B” horror films in the 50’s, a popular subject of terror was insects – from the existence of giant mutated insects to humans being overrun by multitudes of insects, to even becoming insects ourselves.

That’s not surprising – Entomophobia is one of the oldest and deepest fears of humans. And it’s connected to several other fears – contamination, mastication, and infestation. The fear likely began as a way to keep us safe, but as we grew into larger cities and urban landscapes, it took on a new power.

Of course, this time of year, the fear of spiders, bugs, bats and the like is at an all time high. So let’s look at the scariest insect-related horror films we found.

We couldn’t have compiled a list of scary insect-related movies without including these films. The first adaptation of the horrifying short story by George Langelaan starred Vincent Price as a detective. He comes to his sister’s aid when her inventor husband tests an experimental teleportation device which doesn’t work, but the husband emerges later, with the head and arm of a fly!

Interestingly enough, the actress who played the wife was herself deathly afraid of insects, so the director chose to utilize her natural reaction when the other actor showed up in makeup. Two sequels followed, each crazier than the first. In Return of the Fly, Vincent Price helps the inventor’s now adult son try the same experiment. And Curse of the Fly lives up to its name as now the grandsons get into the game, with similarly disastrous results.

Most people today point to the Jeff Goldblum remake that came out in 1986. The Coneneberg-helmed film is even creepier to behold, and the full-on human-fly hybrid makeup won an Oscar that year.  The makeup artist would go on to direct a sequel that involved the character’s son, mutated by his father’s DNA. Those films would spawn a comic book, and believe it or not, an opera!

Them! was the first horror film to feature giant insects. In this case, ants, mutated by radiation from atomic bomb testing in Alamagordo, NM. After the heroes, played by James Arness (Marshall Dillon on Gunsmoke) and Edmund Gwenn (Kris Kringle in Miracle on 34th Street) try to kill off the mutant colony, they discover two queens have escaped. This sends them racing to Los Angeles where the ants have built a new colony in the LA River aqueducts, with the film ending in a fiery standoff.

Oh, you'll also want to keep an eye out for a young Leonard Nimoy (Star Trek) and Dick York (Bewitched) who are both also found in the film.

Starring Michael Caine, Peter Fonda and Olivia DeHaviland, The Swarm is about an African killer bee invasion in Texas. Directed by “Master of Disaster” Irwin Allen (who also made Towering Inferno and Lost in Space), the film was largely panned in 1978, despite the all star cast. Like in so many of these films, the military take command, and it all ends in flames. Sadly, so did the film’s prospects, earning less than it cost to make.

Mimic is one of the stranger insect horror films to come out in recent years. This time, the insects in question are cockroaches. Roaches in New York are spreading a deadly virus, so, in true mad scientist fashion, the CDC develops and releases a genetically engineered Judas-breed of cockroaches that kills off the disease-carrying ones. The experiment works and everyone’s safe....

...until 3 years later, when a mysterious chitinous humanoid creature starts killing people off. Turns out, some of the genetic engineering worked, and some didn’t. So instead of all of the female roaches dying off quickly, the bugs rapidly mutated to perfectly mimic human beings. Oops!

This film also tries to end in flames, with the addition of the final bug splattered onto an oncoming train. But wait, there’s more. Even though the film just broke even at the box office, it spawned – get this – two sequels! In the second, one of the surviving Judas-breed tries to reproduce with one of its creators. She manages to decapitate it, but of course, as we know, cockroaches can live for a while without their heads.

The third film borrows heavily from Hitchcock’s Rear Window. And that’s about as positive as it gets.

Although spiders aren’t insects, they often get lumped in with other bugs, especially when there are so many great spider-based horror movies. Eight Legged Freaks takes on the giant creature version, while Arachnophobia gives us the best of infestation.

John Goodman and Jeff Daniels team up to take on deadly South American spiders accidentally transported to a fictional mid-California town. Once again, fire nullifies the threat, but not until after Daniels overcomes his own fear of spiders. Stephen Spielberg produced the film, which is probably why it never got sued for borrowing content from…

In Kingdom of Spiders, Star Trek’s William Shatner is a veterinarian who discovers tarantulas are poisoning cattle. He teams up with an arachnologist who theorizes that the widespread use of chemical pesticides has altered the behavior of the usually solitary spiders. They have been forced into communities, similar to ant hills, and are swarming and killing just about anything that moves.

Yet again, they use flames to try and eliminate the threat, but the spiders head underground.  The mayor decides to spray the hills with the very pesticide that caused the problem. Because, in a plot point reminiscent of Jaws, the theory was that bringing in more natural spider predators like birds and rats will scare folks away from the county fair. We won't tell you how it ends, but it isn't happy.

While chemical pesticides haven’t caused mutated insects or spiders – so far – they aren’t the best approach to home pest control either. The good news is that harsh chemicals aren’t the only answer. Good News Pest Solutions specializes in using the most advanced, reduced-risk pest control solutions for your home or business. If you’d like to avoid the horror story of insects invading your space, just ask about our Perimeter Plus Green Pest Control when you give us a call!