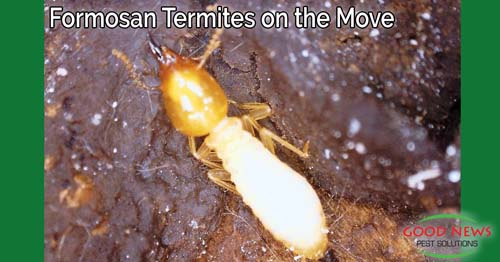 Formosan Termites on the Move

There’s a saying we have here at Good News Pest Solutions: There are two types of homes in Florida. Those that have termites and those that will have termites.

It’s not just a folksy sales pitch – it really is true. We have 21 species of termites in the Sunshine state. And six of those are invasive species – we have more of them than anywhere else. And none are worse than the Formosan Termites.

How Did They Get Here?

The first Formosan Termites were reported in Florida in the 1980’s. But scientists at the University of Florida say they probably arrived back in the 1950’s. That makes sense, as our State was experiencing significant population growth after World War II. It’s suspected that many of the men who served in the Pacific region unwittingly brought the little buggers back.

A certain mouse decided to open his vacation home in 1971 and that brought a lot of folks to the Central part of the state. (Thanks, Walt)

And when construction really exploded in the late 70’s and early 80’s, new developed communities started springing up everywhere. All of that new building was just too much for the Formosan termites to resist.

How Do The Termites Spread?

Coptotermes formosanus share interconnected foraging galleries in soil. The colonies start slowly but, once started, grow exponentially, increasing from a few transplanted termites to a colony of up to 70,000 alates (reproductive termites) that produce millions of soldiers and workers.

Colonies most often spread when these winged alates swarm at dusk into the humid air between March and May. Females search out nesting sites with the males following close behind. When a suitable spot is found, they land, shed their wings and begin mating to form new colonies.

Because the insects are so small – around a half an inch long – it is also easy for humans to transport an entire young colony of Formosan termites in potted plants, lumber and transplanted trees.

The easiest of the Formosan termites to spot are the soldiers because of their orange-brown oval shaped heads which are slightly out of proportion with their whitish bodies. At the front, their mandibles hide a large opening that secretes a defensive goo.

If you spot soldier termites, or discarded wings, you need to act quickly.

What Else Can I Look For?

On a one to one basis, Formosan termites eat about the same as most other subterranean termites. But because they run in super-colonies, they do a lot more damage in a lot less time. They usually go from the ground up. And they will eat ANYthing that is wood or cellulose. They can even eat through PVC pipe!

You may notice mud tubes and/or damage around windows and the bases of doors. Because the termites hollow out the wood they are devouring, they may “pop out” of the paper-thin paint and wallpaper that remains. If you could see inside an infested wall, you’d spot wood remains that look like shredded-wheat.

If you suspect an infestation, tap on wood, especially around windows, doors and baseboards, with a hard object such as a light hammer or screwdriver handle. If you hear a distinct hollow sound, you know you have a problem.

If you’re suspicious at all that you might have a termite problem, call a professional right away. Don’t ignore the signs or you may be out huge sums of money for damages – and still need a pest control company to handle the issue.

Who Do I Call?

Some pest control professionals can properly treat your home or business for a termite infestation. But there is only one on the Gulf Coast of Florida that offers you protection before infestation – with a $1-million repair warranty. Not even your homeowner’s insurance will cover that!

Good News Pest Solutions Term Assure 365 bundles our most popular year-round pest solution for insects, then adds world-class termite protection, all for an affordable price. Along with the tri-annual treatment, we inspect the perimeter of your home for termite damage, including the termite monitoring stations around your home that we check to make sure everything’s safe. And once a year, we do a full inspection, just to be sure.

For 30 years, we’ve kept homeowners from Bradenton to North Fort Myers safe from subterranean termites like the formidable Formosan termites. Don’t you want peace of mind, knowing your home may never get termites? To learn more, or schedule your appointment, call one of our experienced professionals today!