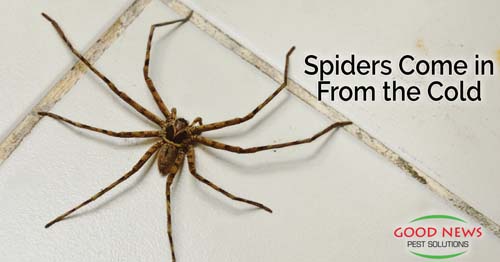 Spiders coming in from the cold

Yes, it’s getting to be that time of year again…

Thanks to our sub-tropical climate and the annual influx of snowbirds, there are, at any given time, nearly 60 different species of spiders running around in the Sunshine state. Most of us in Florida have only seen a few species of spiders. On average we run into maybe 8-10 different arachnids in daily life:

Wolf spiders are some of the most common species in Florida, but you may not always realize you’re seeing them. They measure about an inch to an inch and a half and they live on the ground, where they blend well with leaves and sticks. Unlike some other species, they have good eyesight and can feel the slightest vibration, which allows them to hunt without webs.

Long-Jawed Orb Weaver spiders are often mistaken for daddy long-leg spiders, especially by Northerners. These spiders have just one pair of longer legs, along with a pair each of medium and small legs. You’ll often spot them near water in bushes or structures, clinging to their foot-long webs with the smaller legs.

If you spend any time in the Florida woods, you’ll likely run into these spiders or at least their large webs that can be almost invisible in the right light. The female spiders are less than an inch long – the males even tinier, but the webs can stretch 3-4 feet across clearings between trees.

These spiders also “hang out” in the woods. They’re a little smaller than the Golden Silk females, and they are usually seen literally hanging from the center of their thicker webs. Look for the Arigope’s distinctive silver carapace and yellow and black markings to be sure.

These smaller arachnids are brightly colored and don’t build webs. Instead, they pounce on their insect prey from above. They’re easy to identify with three rows of eyes. Along with finding homes in underbrush, these guys also linger in awnings and in the soffit and fascia structures of homes.

Crab spiders are another non-web based species. They usually hide in flowers and foliage, clinging to the vegetation in a crab-like fashion. They often are not seen by humans or prey until they move since they are so good at natural camouflage.

This festive spider is one of the most recognizable of Florida spiders – their abdomen is usually white with black spots and large red spines on the margin. While they may resemble a skull, the spiders aren’t at all dangerous to humans. And their red spines help ward off diving birds from eating them.

These small green spiders are a favorite of Florida’s produce growers. While they don’t spin webs, they tend to linger in bushes and trees, stalking their prey. Their favorite dish just happens to be the caterpillars that would otherwise plague row crops.

You might think that spiders come into your house to get away from the cold. But, since they’re cold-blooded, they don’t feel temperature the way you or I do. Nor are they able to regulate their body heat as we do. As things get chillier, they just slow down as their metabolism adjusts.

There is a reason, though, you might spot spiders inside more often. The insects that the spiders use for food also slow down and hide during the winter. Some burrow deep, some abandon their future generation (eggs) and some seek a more food-rich environment - one that happens to be warmer.

Also known as: your house.

So, if you were a spider and needed to keep fed and active, and the food was indoors, guess where you would be headed? And the issue tends to be greater in Florida for the simple reason that we don’t get as cold as our northern neighbors. So some insects that would normally hibernate -- just relocate.

Even though spiders are not technically insects, we often refer to them as bugs, just like the other creepy crawlies who sometimes invade your home or business. But remember, as much as spiders creep some of us out, the good news is they’re God’s front line natural pest control experts.

Here at Good News Pest Solutions, we like to follow in the spider’s footsteps as often as we can, with reduced-risk, pesticide-exempt pest control solutions that keep you and your family safe, as well as steward the planet we were given. And we’ve been successful for 30 years now throughout Sarasota and Port Charlotte.

To schedule an appointment for your family – or learn more about our services from one of our experienced experts – just give us a call!