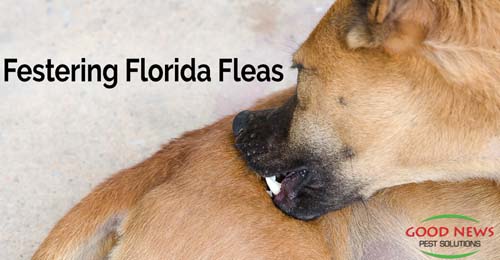 If you’ve lived in Southwest Florida for any length of time, you might have heard the myth that we have no seasons. Sure, Spring, Summer, and Fall all feel similar, it’s often around 80 degrees year round, and the leaves don’t change. But we definitely have seasons.

And of course, that means that there are some things that we deal with year round that other places only have seasonally. Things like fleas.

Years ago, cat fleas – the most prevalent species in Florida – traveled with their northern hosts to visit the Sunshine State. Some came with carpetbaggers and former military folks seeking better fortunes. But the sub-tropical weather convinced the second generation of Ctenocephalides felis to stay.

Of course, fleas don’t actually think that way, as far as we know, but it’s clear to see that the weather kept them here.

The same could be said for their European cousins, the dog fleas. Their presence in Florida is likely due to coming over with Spaniards and thriving here, while the colder temperatures of Europe whittled down the population.

It would be helpful to note that the common names of the fleas are not representative of their only hosts – just their favorite ones. Both cat and dog fleas can be found on either animal, as well as cattle, humans and, well, any warm blooded feeding source.

Once a cat flea attaches to a host, it feeds on the animal’s blood before laying its eggs. But it doesn't have to. Adult fleas can survive for long periods without feeding but need blood to reproduce. Fleas lay between 5 and 20 eggs at a time in the hair or fur of their host or nearby.

Within about 25 days, the hatched larvae finish the 3 stages of growth, morphing into adult fleas and the process starts again. A single flea may lay up to 500 eggs in the course of several months.

In addition to the natural itchiness of the flea bite, fleas sometimes also carry parasites and diseases with them. You may remember rats being the culprits for the Bubonic Plague in Europe. But it was actually the fleas on the rats and other rodents (guinea pigs and gerbils too!) that spread the disease.

Dog fleas are known for being infected with tapeworms. They spread into the canine’s digestive system when the dog eats a flea while nipping at an itch. Similarly, humans can accidentally ingest a dog flea if they forget to wash their hands, and occasionally if one jumps into their mouth.

Additionally, some dogs, cats, and humans are allergic to fleas, giving them an even worse reaction to the bites. Persistent scratching of untreated flea infestations also leads to skin infections.

While there are some home remedies you can try, none are as proven as having a professional pest control specialist come out and handle the problem.

This is a cooperative process. The home or business owner needs to have the infested animal treated by a veterinarian, vacuum any carpets, and wash clothes and sheets, especially pet bedding, with the hottest water you have.

Despite utilizing the safest pest solutions in Southwest Florida, Good News Pest Solutions does require that all animals be vacated from a home or office needing treatment for at least two hours. Because of the flea’s life cycle, it can take about 2 weeks for the treatment to be fully effective.

We’ve been taking care of pets and their owners for more than 30 years. If you have a flea infestation and need treatment, or would like to learn more about all of our expert pest solutions, please give us a call!