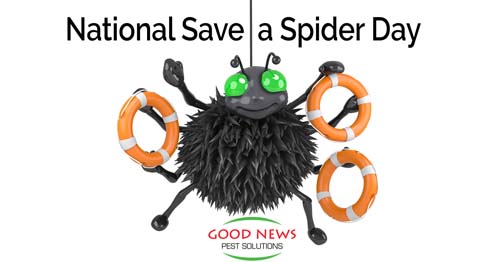 National Save a Spider Day

When you consider all of the benefits that certain creatures bring us, you have to wonder why we’re so afraid of them. I mean, we bring dogs and cats into our homes and all they do is hang around, eat, sleep and occasionally kill a random rodent or two.

But consider for a moment, the Spider… March 14th is annual “Save a Spider Day.” And there are some very good reasons to celebrate that rather unusual holiday.

Arachnids provide natural pest control. Just imagine how overrun we would be with houseflies, who carry various diseases, if it weren’t for the noble spider. Spiders also eat grasshoppers, cockroaches, and while it’s not their favorite – up to 20 mosquitoes a day. And having spiders indoors means you may not need as many chemicals to control the insects that sneak in.

Speaking of chemicals… Spiders also protect many of our most bounteous crops of fruits and vegetables. They consume aphids and other insects that would devastate fields, vineyards and orchards otherwise. In fact, without spiders, organic farming would be all but impossible.

Finally, spiders help prevent the spread of many diseases. In case you missed the implication earlier, when spiders eat flies and mosquitoes, they are minimizing the spread of some diseases, like malaria and the Zika virus.

Spiders have many natural traits and abilities that scientists and engineers study on a regular basis. Sure, it’s a little creepy to accidentally walk into a spider’s web out in the wild, but did you know that spider silk is the strongest known natural material? Studying the natural properties of spider silk has led to creating synthetic materials stronger than bulletproof Kevlar.

While a few spiders bite humans, it’s rare. And their venom is actually more beneficial than harmful. It’s already being used to treat pain in some instances. And researchers believe it may be able to treat arthritis and assist with heart conditions.

Okay, this isn’t one we’re all that thrilled about sampling. But in South America and certain Asian cultures, spiders are a delicacy. Fried spiders, Tarantula shish-ka-bobs, crunchy roasted spiders. You can even get Tarantula jerky from the Amazon on Amazon! In fact, some people consider eating spiders to bring good luck!

So why does a good percentage of our population have an inordinate and unfounded fear of spiders? Psychologists believe it’s a fear that is developed and passed down from our parents and grandparents. And being scared of spiders seems to be a fear largely found only in Western culture. Hence the spider-eating of the Third World.

Some historians point all the way back to the Black Plague in Europe. In the Middle Ages, we often blamed spiders for spreading the very diseases they helped control. Water and food became “corrupted” if spiders were found crawling in them.

But we also know that fear is inheritable. Maybe our very DNA is wired to be afraid of spiders, whether they’re truly scary or not. And at least one arachnologist says even the ones we should be afraid of aren’t as bad or populous as we often think.

Either way, we hope you’ll take a moment out on March 14th to think about the noble spider and, if you find one in your home, just escort it out. At least for that day.

The good news is spiders aren’t the only natural way to control pests. Here at Good News Pest Solutions, we take pride in offering the safest, most reduced-risk pest solutions on the Gulf Coast of Florida. If you’d like to join our happy customers from Ruskin to Punta Gorda, give us a call! We’d love to meet you!