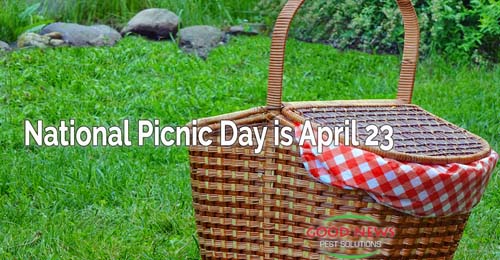 Did you know our word picnic comes from a French term? The phrase pique-nique roughly translates to "bring a little or almost nothing". It became popular in the mid-1600’s as shorthand for couples who would bring their own wine to dinner.

In the Middle Ages, the phrase was adopted by various royalty and upper crust denizens. Their picnics were elegantly presented meals following a successful hunt. They were also specially catered lunches on the patio or the lawn following a croquet game or other daytime leisure activity. Average people barely had the money to enjoy a decent meal, let alone the ability to set aside the time to prepare food to be taken out of doors to be eaten.

When the French Revolution started eliminating members of the royal families, those who could fled to England. They brought the term with them, but it quickly started to take on new meaning.

The spread of the Protestant church movements actually helped transition picnics to the common man. In the 1800’s under Queen Victoria, England began to develop more middle class households.

One large factor in that transition was the serialized publishing of Mrs. Beeton's Book of Household Management that set the standard, long before Mrs. Manners, of how proper housewives should behave and care for their husbands.* When it was finally bound in one volume, it contained hundreds of tested recipes, including a proscription for a proper picnic.

Of course, that’s a lot of food for a lot of people, so that quickly developed into what we think of now as a good old fashioned potluck. In fact, we know from history that what we now call Communion, the first century Christians shared as part of a larger feast.

Eating Out of House & Home

When the picnic migrated to the Americas, it took on some new aspects. Instead of large groups eating together, sometimes including entertainment, picnics were more often for single families or dating couples. As with many things, the Americanization of the practice took on an independent, rugged frontier feel.

Instead of the high society gatherings that birthed them, picnics were a means to “get away from it all.” Mini-vacations to the countryside or the park to relax and rejuvenate became popular, sometimes even in cemeteries. And strangely enough, that type of everyday picnic found its way back to Europe, becoming the norm there too.

Although we don’t know the origins of April 23 as National Picnic Day, we are happy to celebrate it. Of course, with the current health restrictions in place, we can’t head to the parks or the beach – not even the aptly named Picnic Island Park. But we can have a wonderful celebration in our living room or backyard, staying safe with our families.

No need to bring all the meat pies and cold puddings either – cold cuts or BBQ is fine. Homemade ice cream is even better. And since April 23 is also German Beer Day ... Just be careful not to bring any of the outside bugs in with you when you move the festivities back inside from your backyard.

And of course, there’s always the chance of those unwelcome guests at any picnic – mosquitoes.

The good news about having the picnic in your own backyard, is you can control those biting buggers. Our exclusive No Bite Zones technology is now available at consumer prices. And if you live in Manatee, Sarasota or Charlotte Counties, we’ll deliver it right to your door – in a mask, of course. Give us a call to find out more! Then go enjoy your picnic!

*While times and attitudes have changed, for the better, Mrs. Beeton’s guide is still in print. Its primary use is as an extensive (900 page!) cookbook.