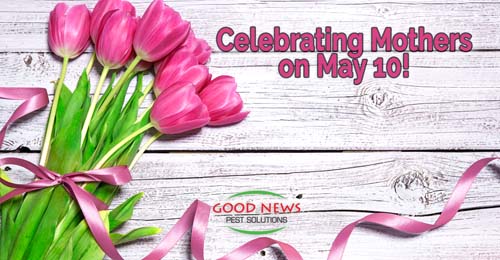 Celebrating Mothers on May 10!

This Sunday, we will honor the women in our lives. While the day is named for and commemorates the woman who gave birth to us, in recent years, we’ve informally expanded the celebration. Now, we tend to include all of the ladies who helped raise us – mothers, grandmothers, aunts and sisters.

While the official legal holiday didn’t launch nationwide until 1914, the roots of Mother’s Day are planted much deeper.

Feast Fit For a Mother

In the ancient world, there were often more festivals that celebrated the female aspect of pagan deities than male. As many of these disappeared or were subverted and transformed by the early Christians, they became feast days or were incorporated into their religious observances, like Lent.

During the Middle Ages, the fourth Sunday of Lent became known as “Mothering Sunday.” Young domestic servants would be given the day off to return to their mothers and home parishes. The eldest son or daughter brought a traditional ‘mothering cake,’ a fruit-filled simnel cake, with layers of almond paste.

Here in the United States, the origins of this day hearken back to the Civil War. Julia Ward Howe, who wrote the lyrics to the Battle Hymn of the Republic volunteered with the US Sanitary Commission. There she helped establish sanitary conditions for hospitals and health care workers.

Howe connected with Ann Reeves Jarvis, who had labored even before the war in West Virginia, to combat unsanitary living conditions and teach young mothers to safely care for their children. She called these exercises “Mothers’ Day Work Clubs.” After the war, she worked to help divided families reconcile.

Meanwhile, Howe fought for the right for women to vote and in 1870, proposed a “Mother’s Day for Peace.” While adopted in Boston and a few other areas, celebrations dropped off quickly as The Great War in Europe loomed.

But back in West Virginia, Jarvis’ daughter, Anna M, campaigned heavily and convinced the local Methodist church to hold a memorial service in May after her mother's death. They repeated it the following year on May 10, 1908. The Mayor of Philadelphia took note and embraced a similar celebration for his city on the second Sunday in May each year.

President Woodrow Wilson would make it a law in 1914, right before the rest of the world erupted into war.

A Mother of a Day

These days, we typically celebrate our mothers with cards, flowers, and dinner at their favorite restaurant (even if it’s sometimes really our favorite). If we’re far away, we call and chat with our moms and mail gifts.

While this year may seem more challenging, we can still celebrate mom – within a reasonable distance. Thanks to technology, we can now transform those phone calls and family dinners. We have Portals , Skype, and Apple FaceTime that let us connect a few at a time. For larger families, we can roll out the Zoom and schedule a long-ranging conference call for the whole brood.

The good news is that dinner doesn’t have to be her responsibility either. Thanks to local agreements, even if your favorite restaurant is still closed for dining – or limited to 25% capacity – you can order curbside pickup or delivery from the restaurant or third parties like Postmates. Just remember to order a little earlier than you normally would – the restaurants may be empty in the booths, but will be doing exponentially more business at the door.

After dinner, you can “walk off” your calories with virtual tours of botanical gardens – no waiting, no crowds, and you can experience the best in the world, from the comfort of your couch.

Good News Pest Solutions is an essential business in Florida, so we’ve been open with some restrictions throughout this Coronacrisis. But now that things are starting to roll out again, we’ll soon be back to full service business.

Because you’ve been sheltering indoors more than usual, several insects and other pests probably followed you in, especially in our record-setting spring temperatures! Our Go Green Perimeter Plus program takes care of all of those and more. If you’d like to learn more, or to schedule our high-trained techs to come right out to your home, give us a call!

In the meantime, we wish all of the moms out there a very happy and blessed Mother's Day!