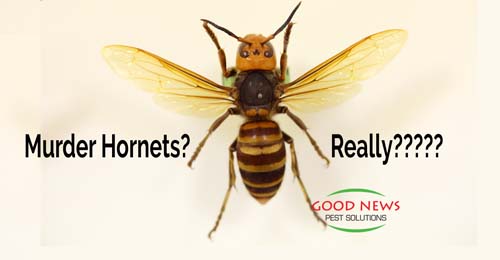 The year 2020 is a lot of things: The year of the Eye, for obvious reasons; in the Chinese zodiac the year of the Rat, which seems strangely appropriate; the 200th birthday of Florence Nightingale, and as such, the year of the Nurse and the Midwife...which also seems appropriate, given our current circumstances.

But for many, 2020 is best remembered by one word: FEAR. Fear of politicians' agendas runs amuck – on both sides and within both parties. Fear of sneezing, coughing, our neighbors, and contracting COVID-19 as a result. Fear of an upcoming recession. And most recently, fear of Murder Hornets.

Yes, just when you thought 2020 couldn’t get any worse, we apparently have homicidal Asian anti-pollinators invading the United States. Except, like many aspects of 2020, the so-called murder hornets are not as bad as, well, mostly the news media, would like you to believe.

Don’t get us wrong, murder hornets do pose a threat to us here in the United States, but not because they’re killing humans. The murder moniker comes from what these hornets do to their archenemies – honey bees.

Vespa mandarinia is, hands down, the largest hornet in the world. They can grow up to an inch and a half in length, and their large biting mouths can decapitate their victims. What’s more, although hornets tend to be solitary hunters, these Asian giant hornets hunt in packs – seeking out beehives, where they crawl in and rip the heads off our friendly pollinators.

While their sting, if you upset them, can be painful, the real danger Murder Hornets pose is to our ecosystem as they eliminate the already threatened honeybees before they can do their God-given work.

And just like comic book villains, the murder hornets have unwitting allies. Insects have no capacity to understand or influence our human interactions, so it’s not really their fault. But fear is actually hurting more of our ecosystem.

Fear of murder hornets – which again aren’t lethal to humans and rarely sting them – has led to a national panic. People in China, Japan, and Korea have coexisted with these giant hornets (also referred to as great whale bee, big hornets, and the great sparrow bee) for centuries. But here in America, fear is causing people to lash out at native bees.

Despite the fact that the ‘yellow hornet’ has only been spotted in Washington state and British Columbia, people across the United States and Canada are freaking out and killing the natural bees and wasps we need to pollinate 75% of our food supply.

We’re actually helping the hornets and hurting ourselves.

In truth, more people in the United States die every year of honey bee stings, often as a result of allergies, than die globally from these hornets.

Really, if we’re setting up a death row lineup of insects, murder hornets are WAY down at the low end. The number one insect that takes out human beings? The mighty mosquito.

Yes, you read that right. Mosquitoes are responsible for literally millions of deaths each year from malaria, dengue fever, EEE, Zika virus and other diseases, according to the World Health Organization. In fact, not only are mosquitoes responsible for some 50-billion human deaths, recent research has established that mosquitoes likely killed off more dinosaurs than the meteor crash.

And you thought the Velociraptors were the most dangerous creatures in Jurassic Park...

The good news is you don’t have to worry about mosquitoes if you don’t want to. Our exclusive No Bite Zones technology – now available at consumer prices – turns the biting pregnant mama mosquitoes into harmless vegans. And their offspring carry that vegan-bent with them after they’re born.

Stop by our website to see all the options available for those residing in our regular service area. Order and pay online and we’ll deliver them right to your door. We can even schedule a drop off with our regular service if you’re an existing customer.

For more details on No Bite Zones, or any of our risk-reduced pest control solutions, or to schedule your first home visit, just give us a call!