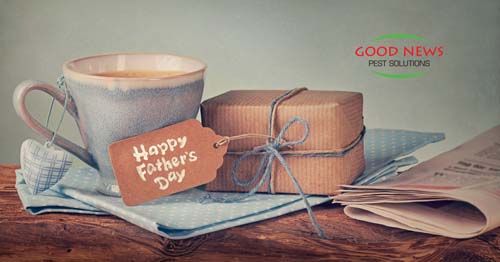 On Sunday, June 21, we will celebrate Father’s Day. A day set aside, much like Mother’s Day, to commemorate the men in our lives who have raised us. But while the Ten Commandments told us to honor our father and mother some 4000 years ago, our national holiday is much younger.

William Jackson Smart led a double life. He was twice-married and twice-widowed. He fought for both the North and the South during the Civil War. And he raised a total of fourteen children – including three from his second wife’s previous marriage (before she was widowed).

He must have made an impression. When his daughter Sonora attended the first Mother’s Day service in Spokane, Washington, she was immediately inspired to create a similar religious service to honor the faithful men in children’s lives.

In 1910, she got her wish. Pastors in churches across Washington state preached a Father’s Day sermon for the third Sunday in June. The Governor, the Mayor of Spokane, and Congressman William Jennings Bryan all sent proclamations honoring the day. Sonora handed roses out - red for living fathers, white for deceased, even visiting the homes of those who couldn't attend.

Wars and Rumors of Wars

President Woodrow Wilson even took part in the event, triggering a flag in Spokane to fly by remote control from the White House in 1916. For years, Sonora Smart Dodd continued to fight to make the holiday official. But after the War to End All Wars ended, a movement rose in the United States to discard Mother’s Day. Instead, the movement wanted to combine both holidays into a generic Parent’s Day celebration.

The Great Depression put many celebrations, as well as retail sales, on hold. During World War II, though, stores and advertisers pushed to honor American troops on Father’s Day, turning it from a religious celebration to a patriotic duty.

But it wasn’t until 1972, in the midst of Richard Nixon’s re-election campaign, that Father’s Day became an official United States holiday. The mother of Father’s Day would live to see it celebrated six more times before her death at 96.

Today, we spend approximately $1 billion each year on Father’s Day gifts. Not quite the “Second Christmas for Men” retailers tried to push 85 years ago, but not bad for a holiday once described as a “sentimental attempt to domesticate manliness” that the men finance.

And the third weekend in June works out well. In the midst of summer, rather than amidst the spring flowers of Mother’s Day, our men can relax and enjoy the holiday. Some take a fishing trip with their kids, spend an afternoon of cooking out on the grill, or just enjoy being with family after church.

Why not consider a non-traditional Father’s Day gift for your dad this year? Our exclusive No Bite Zones all-natural mosquito solutions are now sold at consumer prices. We’ll even deliver it to your door, shepherd’s crook and all. It’s up to you whether you set it up for dad or make it… one of “those” gifts.

Either way, you’re keeping biting mosquitoes away from the backyard fun, whatever dad chooses to make it. To get yours, call us today!

From all of us here at Good News Pest Solutions, our sincerest wishes of a Happy Father’s Day to all the men out there with their families. We hope you’re enjoying your Sunday off as much as we will be!