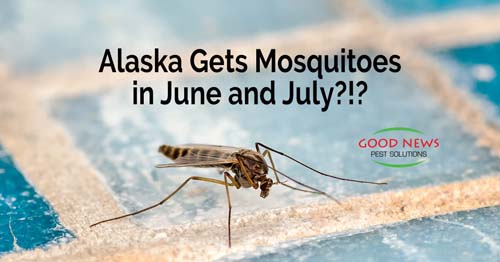 Alaska Gets Mosquitoes in June and July?!?

It’s something you’ve likely never even considered. After all, when we think of Alaska, we think of snow and ice, or 24-hours of daylight, as shown in movies like Insomnia. But Alaska does have a summer. And they also refer to mosquitoes as the unofficial state bird.

This is even more remarkable when you consider that Alaska’s mosquito season is only about six weeks long! Right around the beginning of June, temperatures warm up enough that the rivers, creekbeds and streams thaw. Within 10-20 days, previously laid eggs from the area’s 35 mosquito species hatch and begin growing. By mid-June, through the end of July, the literal bloodsuckers begin swarming the countryside.

Scientists say these Arctic mosquitoes have developed over the years. They grow faster, larger and are more aggressive. And here we thought Polar Bears were the worst thing to run into on the Tundra! Of course, we know, pregnant momma mosquitoes are the only ones chomping down, but that’s still a lot of biting.

Migration of animals and the reduction of their population often means that the mosquitoes may not have their normal dinner hosts. Smaller herds are now the norm and it’s disturbed their migratory patterns as well. In the years when the summer thaw happens earlier than June, the problem is exacerbated. Caribou migrate after their calves are born. When mosquitoes show up early, it’s an unmoving feast for them, leading to greater numbers in later years.

Luckily, the artic mosquitoes are less likely to spread the many blood borne diseases like Zika and Dengue that affect humans. Several of these spread from other species like birds to humans by bites from more tropical mosquitoes. But the majority of disease transmitting species of mosquitoes can’t tolerate the colder climes of Alaska. And for the few that do, the originating animals also avoid the weather.

Here in Florida, of course, we’re about to swing into the height of mosquito season with the tropical systems rolling in and more public places reopening. Thankfully, there is good news. Your backyard can be made mosquito free, safely and for an affordable price.

Our exclusive No Bite Zones technology is now available at consumer prices – and we’ll even deliver! If you want to protect your backyard by turning biting mosquitoes into vegans, and you live in Bradenton, Sarasota or Charlotte Counties, just give us a call!