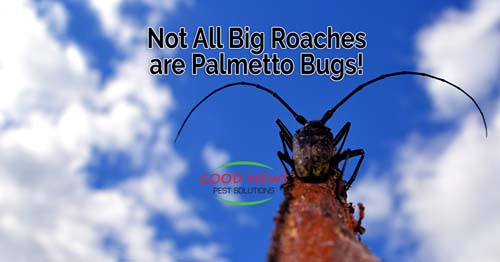 Not All Big Roaches are Palmetto Bugs!

Even if you’ve only been in Florida for a few hours, you’re likely to have heard the popular phrase: “Our neighbors have cockroaches; we have Palmetto bugs.” It’s usually said with some sort of pride – as if our flying bottom feeders are cooler than the ones in other homes or parts of the country.

The saying was first used shortly after World War II, when servicemen and carpetbaggers alike flooded into the Sunshine state. It was meant to be reassuring.

Regardless of the origins, it’s become almost a cliché at this point to call just about every cockroach we see a Palmetto Bug. But they’re not. Palmetto bugs are cockroaches, but a specific kind. Which one? Well, that’s where it gets interesting…

More is NOT Merrier

There are estimated to be some 4500 species of cockroaches in the world. Thankfully, only about one percent of them are in the United States. Of those, there are about a dozen in Florida, but only a few most people will run into.

Periplaneta Americana, or the American Cockroach are dark brown, winged roaches measuring 1½ to 2 inches long. Dark yellow-banded markings that resemble sunglasses marks the cream-colored section right above their wings. They prefer dark, warm and damp environments. They are sometimes also referred to as Florida Wood Cockroaches. Oh, and despite the name, they’re not native to our country.

Among the other species of roaches in Florida sometimes referred to as Palmetto Bugs, we have…

The smoky brown cockroach is slightly smaller than their American cousin, and boast a dark mahogany color. Periplaneta fuliginosa also have flying wings, but a shinier glow and no sunglasses marking.

The brown-banded roach is smaller still, a little over half an inch, and these are the ones you’ll often find scattering in the corners of your office pantry or kitchen. Supella longipalpa prefer starchy foods, but will eat just about anything.

The German cockroach is the smallest and the most prevalent in our area. They slip through the cracks and seem to get into everything. Blattella germanica also reproduce like rabbits and once they’ve infested an area, you’ll need a professional to clear them out.

While Palmetto Bugs usually live outside and feed on rotted wood and plant matter, they do sometimes hitchhike into your home with potted plants, boxes, furniture and other long-stored outdoor items. They’ll sometimes also come up through loose pipes and under door frames when they need food or water.

Some preventative measures – make sure all entrances to your home are properly sealed. Don’t spread mulch right up to your outside walls. And make sure you remove leftovers and clean up after feeding your pets.

Unfortunately, once you’ve seen one roach in your house, there are more and you’ll need to call a professional.

The good news is, we are cockroach experts. For more than 30 years, Good News Pest Solutions has provided the safest, greenest, risk-reduced pest control solutions to the Gulf Coast of Florida. Our Go Green Perimeter Plus program is both a treatment and a preventative against cockroaches and other insects in your home.

With our initial treatment, we inspect, clear out and seal potential entry points for bugs. Then we treat inside and out to keep the creepy crawlies away from you and your family. And we come back every few months to update the service. For more information, or to set your appointment, just give us a call!