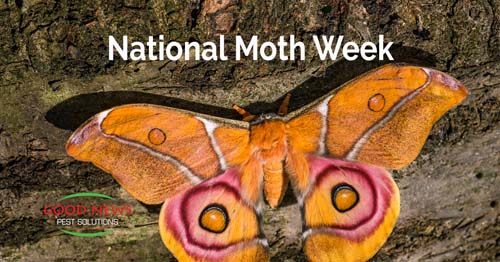 It’s not a federal holiday – yet – but for lepidopterans across the globe, it’s been a time of celebration during this last full week of July for nearly ten years. National Moth Week celebrates the beauty, life cycles, and habitats of moths.

A largely maligned cousin to the far more popular butterfly, most people still think of moths as nuisances that eat clothes. In truth, only 2 of the more than 11,000 species of moths we see in our part of the world devour fabric. And they don’t even look like moths when they do it. They’re still in the larvae stage.

For whatever reason, moths have never gotten the same love and attention as butterflies have enjoyed. They’re seen as creepy; the source of horror film fear. It doesn’t help that they most often show up at night. It connects with our primal fears. Even just the thought of a shadow thrown onto a wall by a moth on the lampshade can startle people.

It didn’t help that the death’s-head hawk moth is famous for its horror connections. You’ve seen the distinctive skull-shaped pattern in movies from Bram Stoker’s Dracula to Silence of the Lambs.

Moths are generally perceived as weird and most often in dull colors -browns and greys, mostly. Many moths do feature these shades – they need them for survival. The colors allow them to blend into trees and wooded areas. But other moths boast a variety of dazzling colors and patterns. In reality, they're some of the most unique and colorful creatures in God’s creation.

The wood nymph and the Polyphemus moth even have colorings and designs that mimic other creatures, protecting them from predators.

We mentioned earlier the 11,000 species of moths in North America, but researchers have identified around 160,000 species of moths across the globe...nearly ten times as many varieties as there are of the butterfly! And scientists believe there may be up to 350,000 more species still to be discovered.

Experts say that in addition to being attracted to bright lights, most moths are suckers for a good sweet beer. Yes, beer. A great way to attract moths and pre-moth caterpillars is to paint a tree trunk with a paste of beer, brown sugar, and banana.

If you‘d like to learn more about moths and participate in National Moth Week, just head over to their website. Everyone that registers as a moth-er, even in their own back yard, will receive a certificate of participation designed by Ecuadorean artist Belen Mena of the NMW team.

We don’t see too many issues with moths on the Gulf Coast of Florida. In fact, some misguided preventative measures we’ve seen can actually be more dangerous than the problem. The good news is if you find moths in your pantry or closets, or see any other invasive insects, we’re here to help. Our Perimeter Plus Green Pest Control solution works great for all manner of bugs. To find out more, or schedule your first appointment, just give us a call!