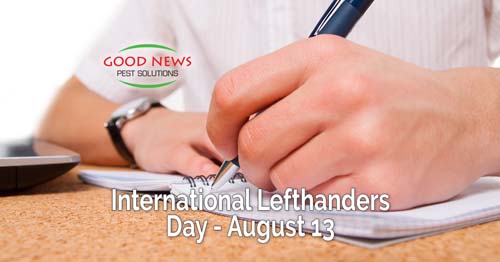 Did you know that in the 40’s and 50’s, and before, all students learned how to write one way? Left handed people were forced to learn to write with their right hands. And no matter how difficult it was for them, they were shamed and viewed as failures if they couldn’t master it.

It doesn’t help that the term for left handedness has an evil overtone… Sinestrality.

Today, kids don’t even have to learn cursive writing. And not only are left handers allowed to do what comes naturally – they even have an annual holiday!

There’s an old joke – because of how the brain works, left handed people are the only ones in their right minds! Former presidents Ronald Reagan, George Bush & Barack Obama would all agree. A quick Google search and you can see them all signing official documents with their left hands. Napoleon, Julius Caesar, Joan of Arc and Winston Churchill were all left-handed. So, apparently, was Jack the Ripper.

Interestingly, in addition to world leaders, a lot of creative folks exist in a left handed world too.

Leonardo & Michelangelo – the renaissance artists, not the turtles – were left handed. Lewis Carroll, HG Wells, Mark Twain and Peter Benchley top the left-handed writers list. Some of the biggest actors and directors are left handed – James Cameron, Drew Barrymore, Morgan Freeman, Tom Cruise, Julia Roberts and Keanu Reeves, are just a sampling of the stellar lefties in the entertainment world. In fact, it seems that storytelling has always been dominated by left handers. Despite the fact that only 10% of the population is left handed, it seems that even the majority of cave painters were southpaws.

Even some of the world’s greatest minds write with their left hands. Albert Einstein, Henry Ford, Aristotle and Marie Curie, to name but a few. And Neil Armstrong put his left foot forward when he was the first man to step on the moon...and Oprah Winfrey signs her giant checks with her left hand.

No Longer Left Behind

I think you’re getting the picture. Although there are only about 708-million left handers on the planet (out of nearly 8-billion people), they definitely make the world a more interesting, often better, place to live. Unfortunately, studies in the last 10 years have also discovered that left handed people make up almost half of the people diagnosed with certain psychotic disorders like schizophrenia.

So it seems fitting that August 13th should be a day that exists for the lefties… as it has been for the past 44 years. So raise your (left) hands into the air and celebrate International Lefthanders Day – whether you’re a lefty or not.

Regardless of which hand you use to write, cook or calculate Pi to the 42nd decimal place, chances are you either have or will have a problem with pests in your home or yard. And Good News Pest Solutions is here to help! Get a head start on autumn by investing in our most popular solution – our Go Green Perimeter Plus. We’ll treat you now and every four months to keep the most annoying insects out of your home, giving you peace of mind. For more information, pick up the phone, and use that left hand to give us a call!