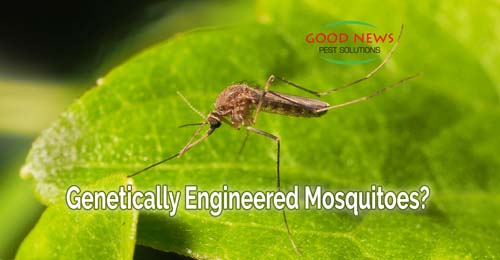 With everything else that has happened in 2020, you might have forgotten the threat some mosquitoes pose. No, they don’t spread the Coronavirus – it’s a respiratory illness. But in fact, a single mosquito bite can be deadly if the mosquitoes are carrying Zika virus, Dengue fever, West Nile virus, Equine Encephalitis or Malaria.

Back in 2016, during the height of the Zika virus concerns, there were several techniques proposed to help limit the spread of Aedes aegypti and Aedes albopictus mosquitoes. Some were effective, many were not, and a few took years to develop.

Now one of the biggest – and most controversial – methods of controlling the mosquito population has gotten final approval.

Over the next two years, some 750-million genetically engineered mosquitoes will be released into the Florida Keys, despite the fact that many are worried about the lack of testing for consequences. The “new species,” named OX5034, has been altered at the genetic level to produce female offspring that die in the larval stage.

As a reminder, only pregnant females bite warm-blooded creatures, including us, to feed our blood proteins to their soon to hatch offspring. Male mosquitoes only feed on nectar – pollinating plants in the process. The new, genetically altered mosquitoes would only produce viable male offspring.

Unless, of course, Life finds a way…

The idea is that the genetically altered mosquitoes would help limit Florida’s extensive use of chemical insecticides that cloud our air. Researchers also point out that many of the mosquito species found in Florida have built up a resistance to the DEET, Naled, and other organophosphates we regularly use. Some solution is needed.

While we can’t control what local governments spray over our heads or into our swales, here at Good News Pest Solutions, we do have a better solution for your backyards.

Our exclusive No Bite Zones mosquito protection program doesn’t kill mosquitoes and limit their crucial role as pollinators. Instead, it transforms those biting momma mosquitoes, naturally, into vegans. And, even better, they pass on their new diet to the next generation.

Now that technology is available to you at consumer prices. And if you live within our main service area, we’ll even deliver it to your door, or drop it off when we come by for your regularly scheduled service. If you want to get some No Bite Zones started in your yard, give us a call!