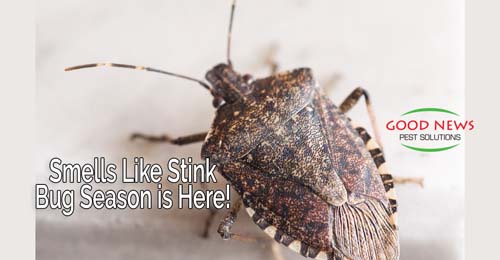 It’s hard to believe when our temperatures are still climbing into the low 90’s that we’ve entered October...and we are almost a month into autumn! But we are. And while it may be a few weeks still before we get any actually cooler weather, we need to talk about the visitors that start flocking here in the fall.

No, we’re not talking about snowbirds. Today, we’re going to take a look at a relatively new visitor to Florida and the United States in general – the brown marmorated stink bug.

Halyomorpha halys found its way to the US sometime in the mid to late 90’s, probably hiding in a cardboard box shipped from East Asia. While there were some earlier sightings, it was first classified in 2001 from specimens in Pennsylvania.  And in the 19 years since, it has spread across the nation, mostly along the Eastern Seaboard. In the winter of 2012/13, it arrived in Georgia, Alabama and, yes, Florida.

The word marmorated is the medical term for the striped markings on the back of the stink bugs. Lines of black, grey and white radiate from the center of their brown thoraxes out to their legs. The markings are even present on the insects antennae and legs.

When the bug feels threatened, that’s where the stink comes in. The insect emits a slightly noxious odor that is described as a strong herbal scent – a smell similar to coriander or cilantro, but amplified. Some bugs can even shoot it several inches away from their abdomen. Scientists believe it’s a defense mechanism against predators.

For years, the brown marmorated stink bug was exclusive to the Atlantic side of the country. But just as the bugs eventually slipped into the Sunshine State, they’ve now spread to just about everywhere. Michigan, New Jersey, and New York seem to be the hardest hit at the moment.

The stink bugs are a particular problem for agricultural areas. The insects come through and feed on numerous fruit, vegetable, and field crops. Kind of like petulant children who won’t finish their dinner, the insects often just pit and scar the crops, leaving them intact but unmarketable.  And in the worst cases, they damage the fruit so much that it can’t be used for processed purposes either.

Crops affected by the stink bugs include apples, apricots, Asian pears, cherries, corn, grapes, lima beans, nectarines, peaches, peppers, tomatoes, and soybeans. As you can imagine, an infestation can be devastating to some Midwest farmers.

Thankfully, the impact to Florida has been almost negligent so far. But that could change at any time. Scientists at the University of Florida are studying Halyomorpha halys, along with some other invasive species that are developing a growing taste for citrus.

On the Home Front

In Northern climes where the bugs are more prevalent, there is the additional issue of stink bugs wintering in homes and businesses. As the insects are so rare in our state, that shouldn’t be an issue.

However, if you’d like to prevent stink bugs, as well as the more populous creepy crawlies that invade our homes on the Gulf Coast of Florida, our existing clients love our Go Green Perimeter Plus pest solution. On our first visit, we make sure all the usual insect access points are sealed, then we use green, family friendly treatments to rid your home of bugs and keep them out.

If you’d like to schedule your first appointment or learn more about our process and commitment to families and the environment, just give us a call!