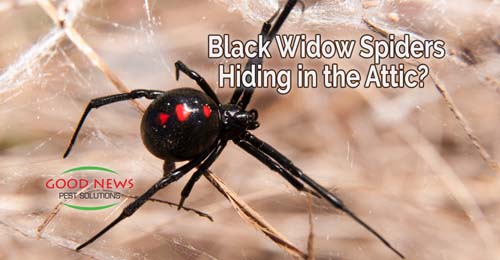 For years, arachnophobia – the sometimes irrational fear of spiders – has dominated the lists of the top scariest things in the world. We don’t know where this primal fear originated from, but the scariest of the spiders has earned her reputation, if not her name.

Black Widow spiders got their unfortunate moniker as a result of scientific study. In truth, female Latrodectus mactans just want to be left alone after mating. In nature, the male spider departs the web and goes about his business. But trapped in a closed aquarium, the hungry female often mistakes the male for prey and devours him. Now, there is one species of widow spiders that does eat the male as part of the mating ritual. But thankfully, the Australian redback spider stays in the outback.

In fact, there are many different species that are classified as widow spiders. The Black Widow is just the most ubiquitous in America and pop culture. There are five widow species that we find in the United States.

Brown Widow Spiders tend to be just that – brown, as opposed to the shiny black of the black widows. They’re also a little smaller and tend to have white bandings on their spindly legs.

While all of the widow species can be found in America, the Red Widow is almost exclusive to Florida. Red widow spiders live in the sand pine scrub areas of Florida beaches. They’re especially prevalent in the Panhandle, but will spin their nests in any palmetto bush they find. Their appearance is similar to black widows, but with distinctive red coloring everywhere other than on their abdomens. Thankfully, while scientists believe these spiders to be venomous, there have never been any cases where humans have been bitten.

A Bite to Die For

Black Widow Spiders are the most venomous spiders in all of creation – 15 times stronger than rattlesnake venom. However, the neurotoxins in their bite are NOT fatal to humans. Bites cause some pain, muscle aches, nausea, and a paralysis of the diaphragm that can make breathing difficult. If you start having symptoms, definitely go to the emergency room. Most affected by the bites are young children and elderly people because of their reduced strength and immune systems.

Thankfully, black widow spiders are not aggressive. In fact, most of the time, bites occur as self-defense, usually if they’re about to be sat on - which happens a lot less now that we have indoor plumbing. It sounds funny now, but typically the most interaction the spiders once had with humans was in outhouses. The warm, um, moist conditions, draw the spiders, who string their webs across the openings. In fact, it was such a problem, at one time most outhouses came ‘equipped’ with a branch to clear the seat before you used it.

Black Widow spiders prefer damper climates and an environment rich in their food sources: other spiders, insects, and the occasional lizard. It’s unlikely that you’ll find Black Widow spiders camped out in your attic, garage or storage areas. Those are more suited to the brown recluse spiders carried here by snowbirds.

Here at Good News Pest Solutions, we know that, despite their works as natural pest controllers, most folks don’t want any spiders in their homes.

That’s why we developed our most popular solution – Go Green Perimeter Plus. For a reasonable fee, you get year-round protection from the majority of creepy crawlies that will try to make their way into your home. The first treatment includes clearing out existing insects and arachnids. If you’d like to schedule your first visit, or chat with one of our expertly trained technicians about our family-safe solutions, just give us a call!