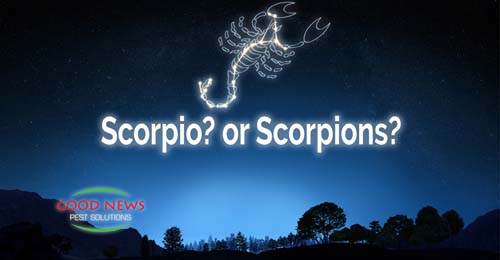 “MUL GIR2 TAB” was the Sumerian phrase that described 'the (creature with) a burning sting.' It alternately guarded the gate to the sun’s nighttime habitat or waged war for the sitting gods. Today, the constellation’s name in Latin is Scorpius – or “scorpion” in English. From October 23 – November 22, the constellation is not visible because it passes overhead while the sun is out. Astrologers believe that people born during this time period are fierce leaders with strange appearances, among other things.

Whether you believe in astrology or not, the “spirit animal” of Scorpios are definitely fierce and strange looking. There are three main types of scorpions we find throughout the sunshine state.

Centruroides gracilis, or the bark scorpion, is the largest scorpion you’ll find in Florida, which ironically means it’s sting is the least powerful, but still painful. Their common name comes from their brownish coloring, convenient camouflage in Florida’s wooded areas.

Centruroides guanensis is yellowish all over with a long, thinner-segmented stinger. Also called Guiana striped scorpions, their sting is as painful as their venom is mild. You’re most often going to encounter this one under rocks or inside epiphitic bromeliads – air plants.

Centruroides hentzi is the smallest scorpion you’ll run into in Florida. They are reddish and have the strongest sting and venom of the three. Stings from hentz bark scorpions can also cause waves of pain as the venom digs deeper into your bloodstream. Because they are adaptable, these critters can show up just about anywhere, and may even make their way into your attic.

Thankfully, scorpions tend not to be aggressive. And while the hentz striped is the most painful, most people will not suffer extreme effects from a scorpion sting. The primary symptoms are numbness, pain, and localized swelling. A couple of extra strength Tylenol usually eliminates the pain.

However, some people suffer from allergies to the scorpion venom – which can make a sting life-threatening if not handled quickly. Of course, children and the elderly tend to be the most at risk. And while some allergies are only triggered by a previous exposure, people who have been stung by fire ants can also develop a scorpion sting allergy. And who hasn’t felt the “bite” of a fire ant in Florida?

Some experts predict that interactions between scorpions and humans will rise. While they generally prefer their own habitats to ours, they can slip in through tiny spaces and have been known to nest in carpeting, giving birth to dozens of baby scorpions. But, again, unlike their mythological counterparts, scorpions tend to be non-aggressive towards humans.

The good news is our most popular solution helps prevent scorpions in your home, along with roaches, spiders and ants. Our Go Green Perimeter Plus treatment is safe for the whole family while protecting them from the most prevalent creepy crawlies we see on the Gulf Coast of Florida.

And just as we no longer have to look to the stars and try to conjure hope from uncaring deities, and can put our trust in Christ, you can depend on Good News Pest Solutions to provide expert service, even in the midst of a pandemic. For more details on any of our solutions or to schedule your initial appointment for Green Perimeter Plus, just give us a call!