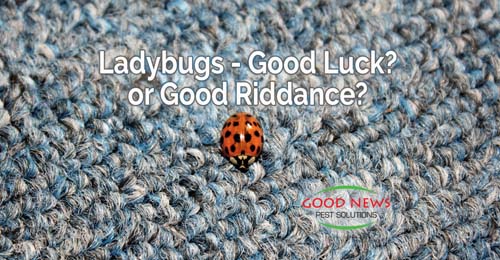 You’ve probably heard the saying that ladybugs are good luck. And that was certainly true for farmers over 100 years ago when the US Department of Agriculture imported thousands of Coccinella septempunctata into our country. The seven-spotted species, also known as lady birds, were brought here from Asia to help control the aphid population that was attacking crops.

The common name for these natural pest controllers originated in Europe. Farmers facing crops ravaged by bugs prayed to the Virgin Mary to advocate on their behalf. Shortly thereafter, the brightly colored insects showed up, prompting them to nickname them “the Beetle of our Lady.” Eventually the name became shortened to lady beetle, then lady bugs.

The results in both Europe and America were the same. When the ladybugs showed up, they quickly kept the troublesome insects at bay. One lady bug can consume some 5000 other bugs on average in its 2-3 years on this planet, all the while adding a decorative touch to the leaves they land on.

Unlike some other species, the bright coloring of the seven-spotted and other colorful Asian lady bugs is a defense. Birds, frogs, wasps, spiders, and dragonflies see the coloring and associate it with a bad taste, seeking more flavorful prey. The nasty taste is likely from the pheromones that the lady bugs secrete along with their yellowish blood. Yes, ladybugs bleed to keep predators away.

Those pheromones have other uses too. The lady bugs use them to mark territory, attract other lady bugs, and communicate. They use this unique signaling system especially during mating and hibernation season. The odor of the pheromones can be sensed up to a quarter mile away. And that’s when things start getting complicated.

As our temperatures start finally and gradually dropping, lady bugs will start looking for places to winter. Some will nestle down with hundreds, even thousands of other beetles in warm rotting logs or under rocks. Or in conveniently available homes.

Yes, these helpful insects can quickly become a nuisance in winter months. As we mentioned earlier, the pheromones they discharge signal other lady bugs to join them. In addition to the smell and taste, the insects’ hemolymph secretions stain – and persist. What’s worse, trying to sweep or vacuum them out once they’re in your house triggers their defense mechanism. More pheromones = drawing more bugs.

Once lady bugs have taken up residence in your home, there is little you can do without professional assistance that will not potentially make the problem worse.

The good news is that there are preventative measures that can be employed. Go Green Perimeter Plus, by far our most popular solution, does just that. Our first step is to inspect your home or business and make recommendations to seal up all potential entry points. This limits access for lady bugs, spiders, cockroaches, silverfish and more. We’re happy to go into full detail on all the benefits and schedule your first appointment – just give us a call!