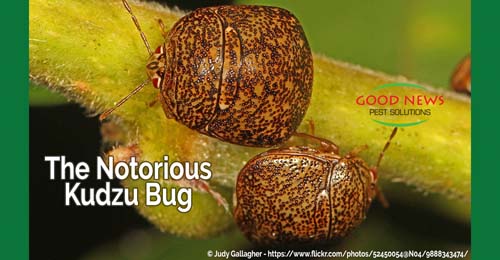 Sometimes we get so used to seeing an invasive species that we forget that it’s not native to the Sunshine State – or even the United States! We’ve looked at several over the past couple of months – ladybugs, red imported fire ants, southern flannel moth caterpillars and most recently the black bean bug.

While it seems like Kudzu Bugs have been here forever, the Asian immigrants only appeared in the US in 2009! It didn’t take too long to spread either – heading south into Alabama, Florida and the Carolinas in a matter of months. And it looks like they’re invading Maryland, Mississippi, and Texas now too.

The biggest problem the Megacopta cribraria creates is it likes to dine on certain beans, legumes, and soybeans. It sucks juice from the soybean and other plant stems, stealing the plant’s nutrients. As a result, the harvest from those crops tends to be smaller.

But there is a bright side – the Kudzu bug takes its name from one of its favorite snacks, the Kudzu vine, which happens to be another invasive species across the South. The Kudzu vine is a much larger problem than the bugs that feed off it. You may not know the name, but you’ve seen Kudzu vines. They overtake and smother all other plants and trees as they rapidly grow. The fact that the Kudzu bug helps slow the growth of the vine is reason enough to put up with it for some folks.

However, if you poke or prod it, it’s liable to emit the foul smelling hormone it stores in its gut.

The odiferous hormone, much like that of the flannel moths and stink bugs, attracts others of its species. It also exudes particles of their bacteria-laden guts to prep the underside of a leaf for the eggs it’s about to lay.

The Kudzu bug isn’t really a problem for homes and humans, although you might have seen the 4-6mm olive colored bug on your white walls or stucco. They are apparently drawn to highly reflective surfaces, although no one’s quite sure why yet. If one lands on your skin, your best course of action is just to let it leave on its own. Its pheromone defense system can leave a mark on sensitive skin.

All the more reason to call a professional. Here at Good News Pest Solutions, we specialize in the greenest solutions to your most pressing pest problems. And all of our treatments are safe for the whole family (even the 4-legged ones). To learn more about our process and what we can do for your home, just give us a call!