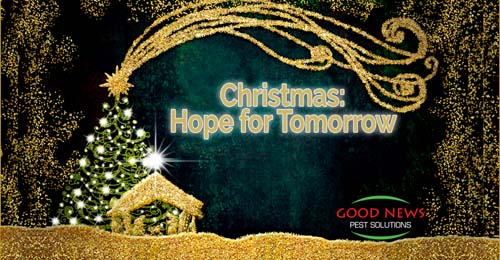 Sometime around 2000 years ago, in a distant Middle Eastern country, a humble baby was born in a stable. He was wrapped in strips of cloth, cradled in a cattle trough, and visited by the some of the lowliest people in the region. A dozen, maybe two, witnessed the birth of the child who would bring the greatest hope ever to our world.

It was a time of turmoil and census, marked by short lives, too much death and an invasive, oppressive government. Yet God chose that moment to enter our world. He became human and lived a life dedicated to peace and showing love to all, especially those who least deserved it.

Jesus, the baby who would become our savior, was born. It probably wasn’t in December, but that’s the day we’ve decided to commemorate the birth for more than 1500 years, so we’ll stick with that now. The entire world’s history was divided by Christ being born in that stable, in that manger. That’s likely one of the reasons why we adopted this time for celebrating his birth. It marks the end of an old, often painful, time and the beginning of a new world.

While Christmas may be lonelier and more stressful this year than most we’ve known, imagine how it was for Mary and Joseph. For the shepherds, forced to work all night. For the magi, wise men who saw a miraculous stellar event that marked a king’s birth, then spent some three years traveling across a great distance to seek him out, stressed, tired, lonely. And Mary giving birth without anyone’s help, surrounded by animals.

Still God’s blessing came. The heavens erupted in song. The shepherds came, saw and woke up the whole town with the great news. “Glory to God in the highest, and on earth peace to those upon whom His favor rests!” He loved us enough to send himself to bring hope and peace.

From the management and staff of Good News Pest Solutions to our family of customers across the Gulf Coast of Florida, we wish you a merry, blessed Christmas! May you hold the hope in your hearts that Jesus came to bring. And may you know the love he lived and sacrificed to offer to all who accept him.