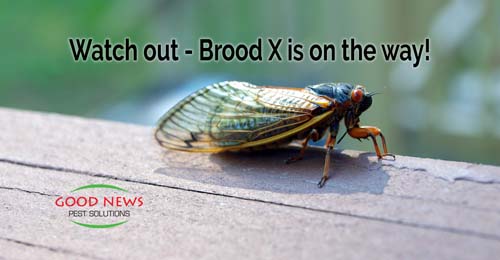 Watch out - Brood X is on the way!

In our work here at Good News Pest Solutions, we are constantly amazed at the variety and specificity of many of God’s creations. Just looking at insects, we know of more than 1-million different species. And scientists estimate there could be up to 9-million more we’ve not encountered yet.

This summer, we’ll be once again seeing one of the most interesting and unusual of all of the bugs we have encountered – Brood X. While the name sounds ominous, these insects aren’t evil, per se...unless you’re a young fruit tree.

Brood X is a species of cicadas that emerges from its underground hiding place every 17 years. Magicicada cassinii will pop their collective heads out around mid-May and begin their mid-air mating dance. And by collective, we mean millions – maybe even billions – of cicadas swarming the air.

The sound of their chittering hum can reach up to 100 decibels. That’s like standing in the middle of a factory floor with every machine working or in the front row of an AC/DC concert. For comparison, the loudest a human can shout is about 120 decibels. But it could be worse – the sound is almost exclusively the males “singing” to attract mates.

Even if you don’t hear the sound, you’ll know they’re around. The ground is littered with the cicadas’ discarded crunchy exoskeletons, shed as the nymphs emerge from the ground and become adults. While underground, the bugs feed off tree root sap and exist in a sort of suspended animation.

No one knows for sure why they rise up every 17 years (or why other periodic cicada species come out after 13 years). Many scientists speculate that the insects evolved this way to avoid some predators, somehow magically arriving at prime numbers. Seems far-fetched, but who are we to say, right?

If a Tree Falls

Because of their similar look and swarming behavior, cicadas are often likened to locusts. However, the two are unrelated. Unlike locusts who will descend and destroy acres and acres of crops, cicadas mostly ignore plants. The exception being young trees, especially young fruit trees.

Cicadas will cut slits in tree branches to lay their eggs. Once hatched, the eggs drop into the ground, where they will burrow and feed off the tree’s roots, as explained earlier. Those slits can leave gashes in the branches. Sometimes they heal, but younger trees are more at risk to lose those branches. And just imagine – literally thousands of split branches can doom a tree just getting started.

Experts say pesticides aren’t very effective and can also be hazardous to the tree. Instead, cover young trees with netting by the middle or end of April. This prevents cicadas from laying their eggs in the branches.

The good news is we won’t see Brood X in our neck of the woods this year or anytime soon. The swarm will hit mostly Midwest states - Illinois, Indiana, Kentucky, Maryland, Michigan, North Carolina, New Jersey, New York, Ohio, Pennsylvania, Tennessee, Virginia, West Virginia, and Washington D.C. The closest they’ll get to us is Northern Georgia.

But we’ll have our own issues. While the temperatures are nice now, too soon they’ll start rising and rainfall will bring our “favorite” insects back – mosquitoes. Thankfully, our exclusive No Bite Zones Mosquito Prevention Program is portable. Turn those mosquitoes into vegans, naturally! We can deliver everything you need when we come by for your periodic scheduled treatments. Or earlier, if you need us to. For pricing and to schedule your delivery or service, just give us a call!