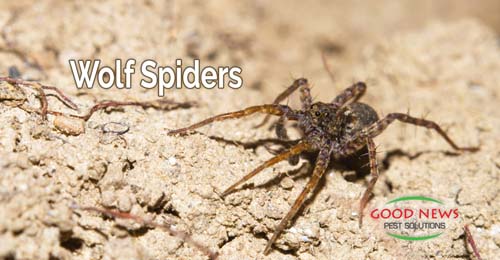 You wake up in the middle of the night feeling unsettled. You look across the room – are those two tiny eyes staring back at you? You grab the flashlight you keep beside your bed and shine it into the darkness. Now you can see six more eyes in two rows, a brown striped body, and a pair of fangs surrounded by hair! You cry out, dropping the flashlight – and your home invader leaps into action...running away into your bathroom.

Let’s be honest, most of us are afraid of spiders regardless of the fact that the majority of spiders are harmless to humans. We forget that they generally act as highly efficient natural pest control practitioners. For whatever reason, most of us have an almost genetically coded fear of arachnids.

So today, we’d like to introduce you to one of the "creepiest" spiders out there – the wolf spider.

Wolf spiders are very common in the Sunshine state. Typically, they’ll stay outdoors enjoying the warm weather and hunting for tasty insect morsels to sink their teeth into. In the rare occasions that they do sneak inside your home, it’s usually because the temperature dropped. Not because the cold bothers them that much – they’re equipped with a natural antifreeze. Usually they come inside because their food supply has disappeared – either into your house or hibernating.

Lycosidae arachnids get their name from how they get their prey. Unlike most spiders, wolf spiders don’t spin a web. Instead, they lie in wait, pouncing on their victims, biting down, injecting a paralyzing substance that also – well, there’s no nice way to say this – liquefies their insides.

The other factor that makes these particular spiders freaky to us humans is that they’re sizable – anywhere from a half to a full inch – but covered in spindly hair that makes them look even larger.

They are sometimes mistaken for Brown Recluse Spiders, but never fear.

Like most spiders, these live up to their ‘lone wolf’ reputation. These spiders are not fans of human flesh. The only time you may get bitten is if you startle them into self-defense and there isn’t anywhere for them to run. They will always choose flight over fight.

As shuddery as this probably makes you feel, the best way to deal with a wolf spider is to gently encourage it to depart from your premises. Killing it just eliminates a hungry, helpful pest control source.

Unless it’s a female – because killing them can sometimes create an even worse situation than just losing your hunter helper. Since they don’t spin webs, female wolf spiders carry their young in an egg sac with them. After hatching, the baby spiders will climb up onto the mother’s back and legs for a few weeks until they’re large enough to hunt alone. Wolf spiders are the only spiders that do this. But killing a mother wolf spider will cause her babies to disperse. And suddenly one spider has become many spiders in your house.

If this happens, you’ll need to call the professionals. The good news is, our most popular pest control solution minimizes the chance that spiders or other creepy crawlies even make it inside by eliminating their food source. Our Go Green Perimeter Plus solution not only treats inside your house, but we seek out and recommend sealing up potential entry points. And we'll come back as often as needed to eliminate the problem. All for an affordable price that includes the safest, greenest pest treatments we can find.

If you’d like to learn more about our commitment to environmentally and family-safe pest solutions, or to schedule your first visit with one of our expert technicians, just give us a call!