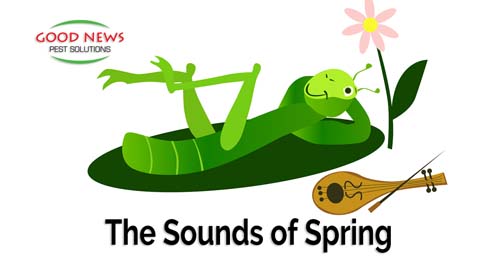 The Sounds of Spring

More insects will start to come out as temperatures continue to rise. Okay, yes, it’s more of a thing in the Midwest than here with our own pretty steady sub-tropical weather. But we’ll still see more insect activity. Just listen for the buzzing of those momma mosquitoes looking for a warm salty snack for their soon-to-be-born babies!

The sounds insects make range from the annoying to the musical – and like a nature-based orchestra, they all use different methods for different purposes.

Romance Is In The Air

Probably the most prevalent reason for insect song is for mating. Katydids rub their wings together to attract a mate, creating the raspy katy-did sound that gave them their name.

The cricket chirps you hear are also males seeking a mate. In fact, you might equate their music to the song “Baby it’s Cold Outside” because the frequency of chirps varies depending on temperature. In fact, count the number of chirps in 15 seconds, add 37 and you’ll get a good estimate of the temperature (in Fahrenheit).

The chirps are generated by rubbing the tip of one wing against the wrinkles on the opposite wing. Grasshoppers and crickets also rub their legs together to create unique music. Sometimes that may be “attack” music, warning away other competitive males, or danger signals if a predator is nearby. Scientists refer to the rubbing process as stridulating.

It has recently been discovered that certain moths stridulate too – as a defense mechanism. The evasive movements these moths take when they detect incoming bats can befuddle the nocturnal hunter’s natural sonar. They generate extremely rapid ultrasonic clicks, creating a blanket of distortion around them.

Bombardier beetles also generate an interesting sound when they deploy their defense mechanism. The beetles fire two chemicals out from portions of their hindquarters simultaneously that creates a popping noise right before they combine to burn a potential predator.

Did you know the buzzing of bumblebees is part of their God-given purpose? The vibrations that cause the faint happy buzzing sound “knocks” the pollen off the plants to land on the bees. When they touch the next plant, some pollen is dropped by the bees and more is dropped onto the bees.

We hear the buzz of the mosquito because their wings spin at 250 to 600 beats per second. And I say spin because their frontward wings that generate the sound create a figure-8 or infinity symbol pattern at the tips.

Here in the Sunshine State, we’re already hearing more of that particular buzz. And it’ll only get worse as the intermittent rains give mosquitoes more opportunities to reproduce. But the good news, you don’t have to get bitten in your own backyard.

Our exclusive No Bite Zones Mosquito Protection Program actually turns biting mosquitoes into vegans. And they pass it down to their offspring, protecting you now and into the future. We will happily bring the product by on your next scheduled visit. To find out more about the program or any of our other green solutions, just give us a call!