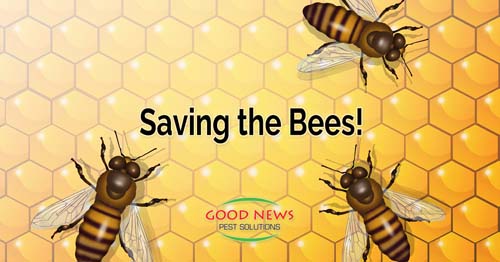 We have the pleasure of talking about a whole lot of different insects. Some you may encounter and others are just extremely cool or weird or maybe even both. But it’s a rare treat when we can talk about a true Queen Bee!

While many people fear being stung by bees, Erika Thompson will routinely have several bees flying around her, lighting on her hands and clothes. And she rarely wears the traditional beekeeper outfit.  The founder of Texas Beeworks not only owns a large farm near Austin, TX, she often relocates 'nuisance hives.' These may be bees who have set up shop in compost bins and water meter boxes or in rotted wood.

And yes, she does get stung sometimes. But she considers it part of the price she pays to service this beautiful part of nature and an essential aspect of our global ecosystem.

Erika has also become a TikTok sensation, with nearly 2-million followers gathered in just a few months. People are fascinated by her relocating bees with little more than her hands. The video of her scooping bees into her bare hands has already had nearly 80-million views!

While some call Erika an influencer – and it’s easy to see why – she first joined TikTok as a way to educate more people about bees. In addition to her popular removal videos, she also posts videos of bees’ more unusual behaviors.

For example, in a bee colony, women run the show – and everything else. Male bees don’t forage for pollen, build the hive, or even defend it – because they don’t have stingers. Their sole purpose is to service the queen. In the winter time, the female bees will even evict some of the male bees so there are enough resources for the rest of the hive.

Queen bees themselves do nothing but bear children. Unlike human royalty, once a queen’s usefulness is done, she dies off or the hive kills her and a new queen is raised. It’s actually very democratic. And when a colony of bees lacks a queen, they will emit pheromones that hopefully attract a new queen. Bees will even help each other bathe!

Erika offers beekeeping classes and even private education for new beekeepers. Texas Beeworks does charge a small fee for bee removal. But out of respect for the honeybees and their hard work, they do not harvest and sell their bees' honey.

Of course, the biggest advantage to having honey bees around is their work pollinating. Researchers at the University of Florida say that without honeybees, cash crops like blueberries, watermelons, cucumbers and onions would produce little to no fruit. And our citrus crop would be significantly impacted as well.

While Good News Pest Solutions doesn’t do bee removal, we can point you in the right direction. We stand by our commitment to steward the planet by using the greenest solutions possible. Our most popular service, Go Green Perimeter Plus, handles the most common Florida insect issues while protecting you and your family. For more details, just give us a call!